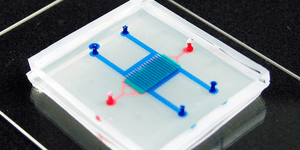 A common question for pharmaceutical companies developing therapeutics for neuroscience applications is the passage of small and large molecules across the blood brain barrier. Without this passage, these therapeutics will not reach their target and will thus not be efficacious. Therefore, many researchers have worked to develop in vitro models for the blood brain barrier that can mimic the pharmacokinetic properties in an inexpensive in vitro model.

The blood brain barrier is the semipermeable barrier separating circulating blood from neural tissue. It is responsible for maintaining the brain’s homeostasis and its breakdown results in several neurodegenerative diseases. But, its function makes targeting the brain with clinical compounds a challenge.

The blood brain barrier’s function relies on the interworking and interconnection of a number of cell populations. They are roughly organized, radiating out from the interior of a vessel, epithelial cells, astrocytes, pericytes, neurons, and microglia. As well as a healthy extracellular matrix made up of collagen, fibronectin, and laminin. It is unlikely that every aspect of the BBB could be included in every in vitro model but identifying the aspects with the greatest clinical significance for the research question in mind is critical for model selection. Depending on the desired throughput there are several options available to design towards.

The most complex models that would still be compatible with screening would be based around microfluidics and incorporate flow. The astrocytes, neurons, and/or pericytes could be encapsulated inside a polymer hydrogel representing a synthetic extracellular matrix. Epithelial cells would be added on top of this hydrogel, forming a tight network, and media would be perfused over the epithelial cells representing the circulating blood. The hydrogel could be synthesized to include collagen, fibronectin, laminin or other proteins of interest. After the epithelial cells have been shown to have formed the tight network the model would be ready for testing. Compounds would be added to the perfusion media and their affects measured via confocal microscopy depending on the optical properties of the bioprinted matrix. If this is not an option the model could be digested and examined via flow cytometry, but this is not ideal as relative spatial information would be lost.

A less complex model more amenable to high throughput screening is to take the relevant cell populations and generate spheroids. The design of the spheroid could be epithelial cells surrounding astrocytes and pericytes. This model would be without fully enclosed vasculature or flow, but the media is treated as the blood substitute. Compounds could then be added, and their effects measured. High content confocal imaging would be much easier to integrate with this second model and tissue clearing could be a useful tool to visualize the ability of test compounds to penetrate the spheroids.

The cells could be taken from patients, animal models, or cell lines. Depending on the desired endpoint metrics, the cell population of interest might have to be modified to allow easier signal processing. Relevant endpoints might include presence of tight junctions and active transport or the distance of compound infiltration and cell viability (total model or particular cell subpopulation).

There are many variations and modifications not discussed, but this is a broad overview of an experimental approach to recapitulating the blood brain barrier for drug screening. At Visikol, we partner closely with clients to develop unique biology like the blood brain barrier models described above. We work closely with clients to determine the type of model that best meets their cost, throughput and validation requirements.