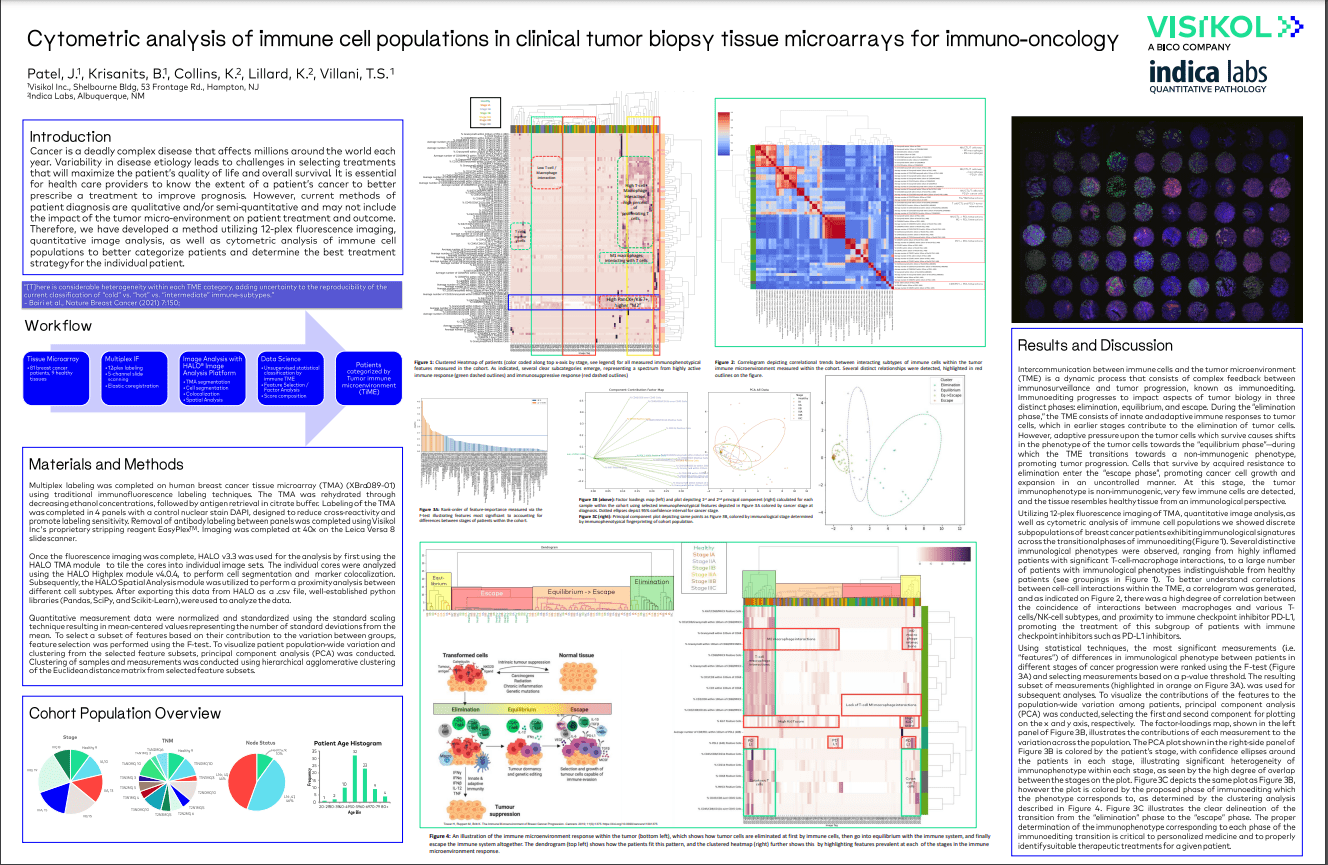 Cancer is a deadly complex disease that affects millions around the world each year. Variability in disease etiology leads to challenges in selecting treatments that will maximize the patient’s quality of life and overall survival. It is essential for health care providers to know the extent of a patient’s cancer to better prescribe a treatment to improve prognosis. However, current methods of patient diagnosis are qualitative and/or semi-quantitative and may not include the impact of the tumor micro-environment on patient treatment and outcome. Therefore, we have developed a method utilizing 12-plex fluorescence imaging, quantitative image analysis, as well as cytometric analysis of immune cell populations to better categorize patients and determine the best treatment strategy for the individual patient. 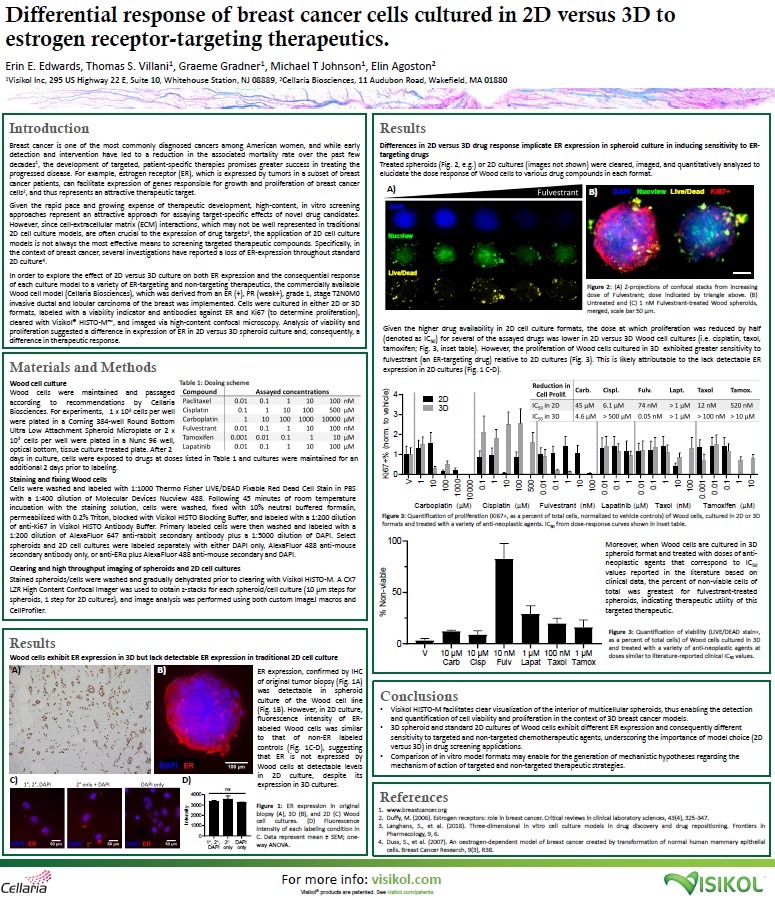 Breast cancer is one of the most commonly diagnosed cancers among American women, and while early detection and intervention have led to a reduction in the associated mortality rate over the past few decades, the development of targeted, patient-specific therapies promises greater success in treating the progressed disease. For example, estrogen receptor (ER), which is expressed by tumors in a subset of breast cancer patients, can facilitate expression of genes responsible for growth and proliferation of breast cancer cells, and thus represents an attractive therapeutic target.

Given the rapid pace and growing expense of therapeutic development, high-content, in vitro screening approaches represent an attractive approach for assaying target-specific effects of novel drug candidates. However, since cell-extracellular matrix (ECM) interactions, which may not be well represented in traditional 2D cell culture models, are often crucial to the expression of drug targets, the application of 2D cell culture models is not always the most effective means to screening targeted therapeutic compounds. Specifically, in the context of breast cancer, several investigations have reported a loss of ER-expression throughout standard 2D culture. 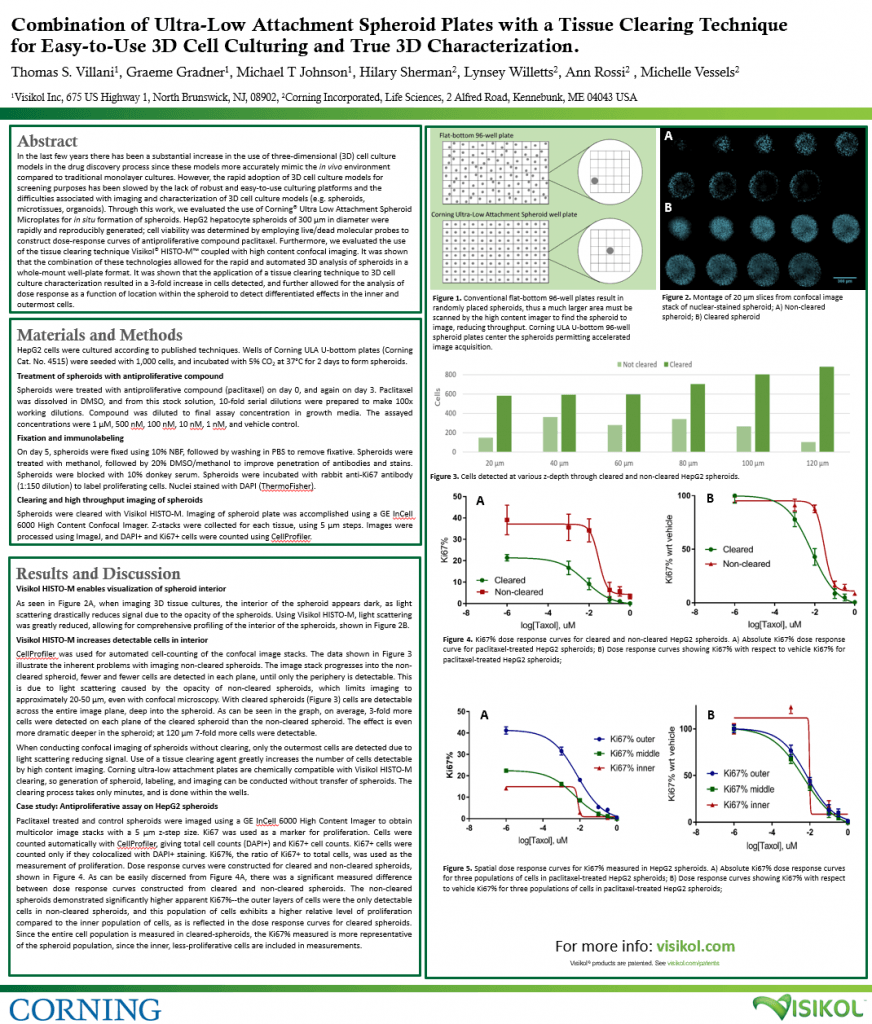 In the last few years there has been a substantial increase in the use of three-dimensional (3D) cell culture models in the drug discovery process since these models more accurately mimic the in vivo environment compared to traditional monolayer cultures. However, the rapid adoption of 3D cell culture models for screening purposes has been slowed by the lack of robust and easy-to-use culturing platforms and the difficulties associated with imaging and characterization of 3D cell culture models (e.g. spheroids, microtissues, organoids). Through this work, we evaluated the use of Corning® Ultra Low Attachment Spheroid Microplates for in situ formation of spheroids. HepG2 hepatocyte spheroids of 300 µm in diameter were rapidly and reproducibly generated; cell viability was determined by employing live/dead molecular probes to construct dose-response curves of antiproliferative compound paclitaxel. Furthermore, we evaluated the use of the tissue clearing technique Visikol® HISTO-M™ coupled with high content confocal imaging. It was shown that the combination of these technologies allowed for the rapid and automated 3D analysis of spheroids in a whole-mount well-plate format. It was shown that the application of a tissue clearing technique to 3D cell culture characterization resulted in a 3-fold increase in cells detected, and further allowed for the analysis of dose response as a function of location within the spheroid to detect differentiated effects in the inner and outermost cells. 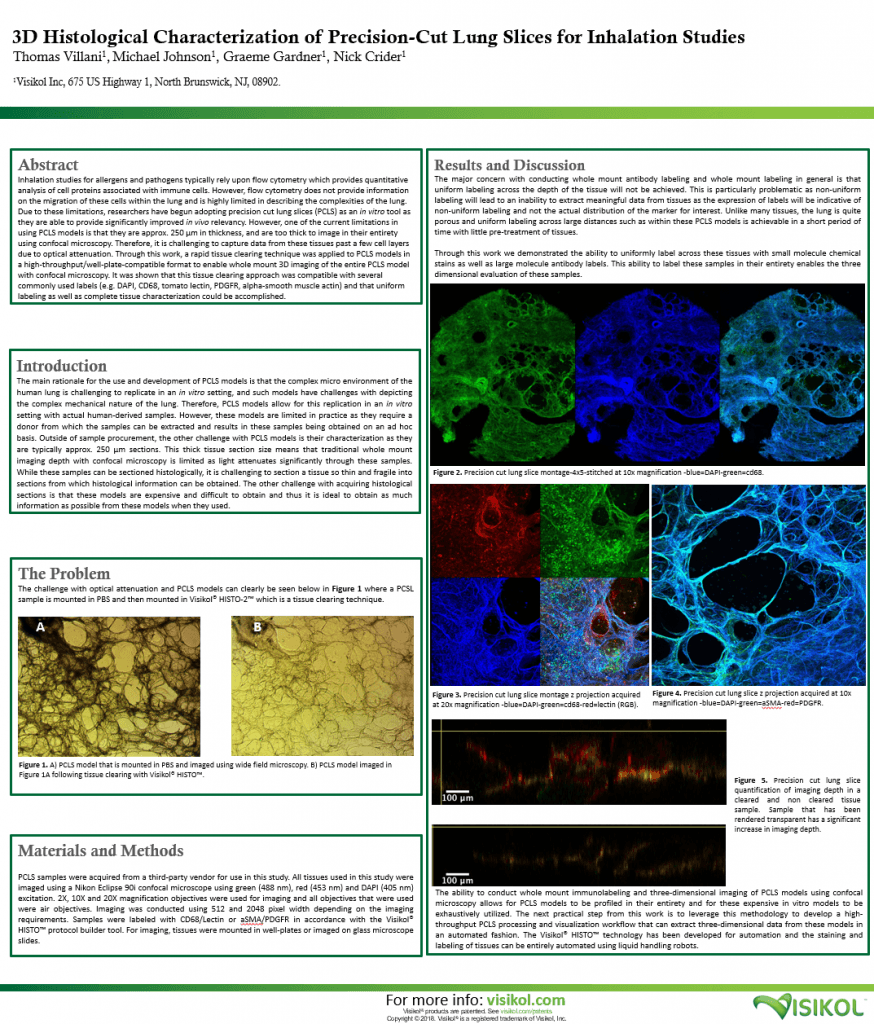 Inhalation studies for allergens and pathogens typically rely upon flow cytometry which provides quantitative analysis of cell proteins associated with immune cells. However, flow cytometry does not provide information on the migration of these cells within the lung and is highly limited in describing the complexities of the lung. Due to these limitations, researchers have begun adopting precision cut lung slices (PCLS) as an in vitro tool as they are able to provide significantly improved in vivo relevancy. However, one of the current limitations in using PCLS models is that they are approx. 250 µm in thickness, and are too thick to image in their entirety using confocal microscopy. Therefore, it is challenging to capture data from these tissues past a few cell layers due to optical attenuation. Through this work, a rapid tissue clearing technique was applied to PCLS models in a high-throughput/well-plate-compatible format to enable whole mount 3D imaging of the entire PCLS model with confocal microscopy. It was shown that this tissue clearing approach was compatible with several commonly used labels (e.g. DAPI, CD68, tomato lectin, PDGFR, alpha-smooth muscle actin) and that uniform labeling as well as complete tissue characterization could be accomplished. 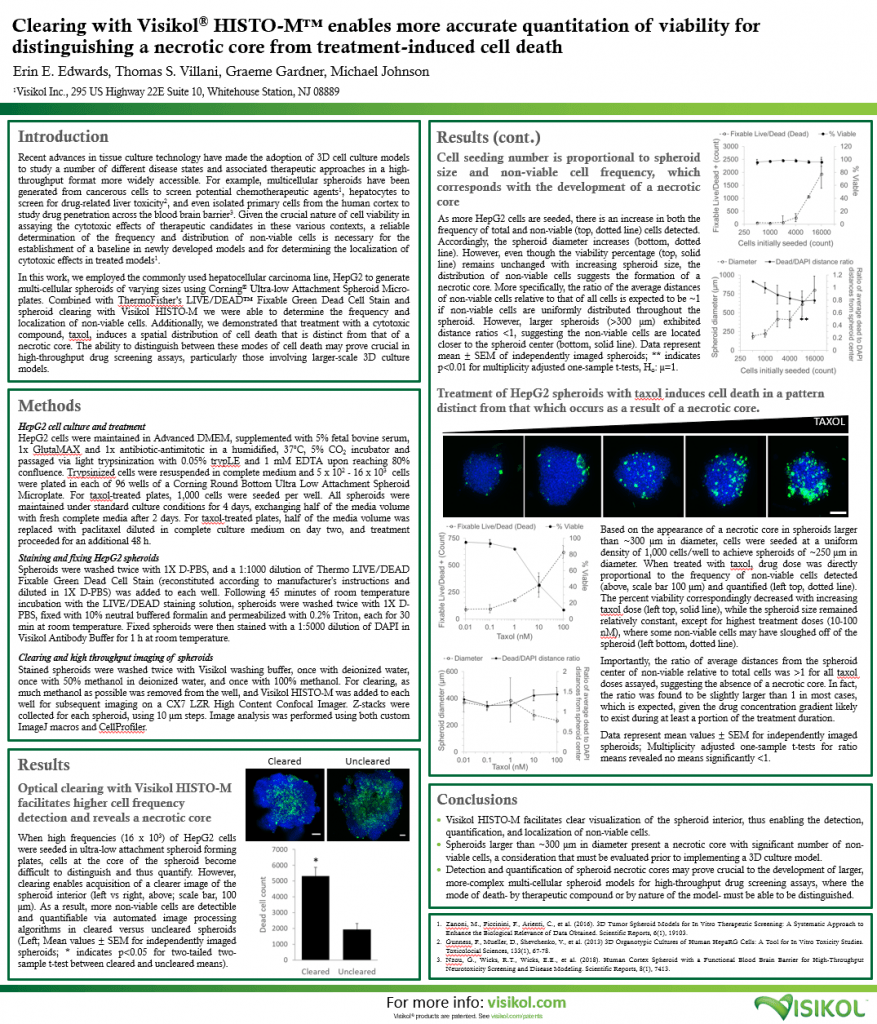 Recent advances in tissue culture technology have made the adoption of 3D cell culture models to study a number of different disease states and associated therapeutic approaches in a high-throughput format more widely accessible. For example, multicellular spheroids have been generated from cancerous cells to screen potential chemotherapeutic agents1, hepatocytes to screen for drug-related liver toxicity2, and even isolated primary cells from the human cortex to study drug penetration across the blood brain barrier3. Given the crucial nature of cell viability in assaying the cytotoxic effects of therapeutic candidates in these various contexts, a reliable determination of the frequency and distribution of non-viable cells is necessary for the establishment of a baseline in newly developed models and for determining the localization of cytotoxic effects in treated models1. 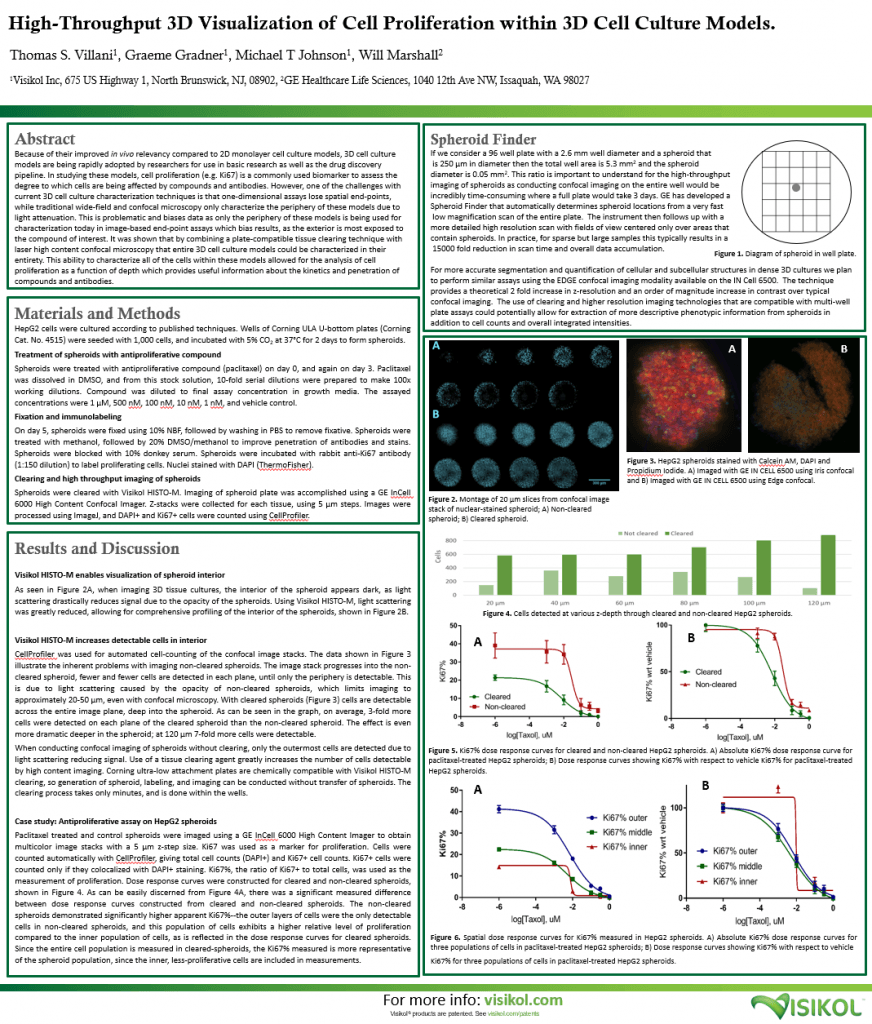 Because of their improved in vivo relevancy compared to 2D monolayer cell culture models, 3D cell culture models are being rapidly adopted by researchers for use in basic research as well as the drug discovery pipeline. In studying these models, cell proliferation (e.g. Ki67) is a commonly used biomarker to assess the degree to which cells are being affected by compounds and antibodies. However, one of the challenges with current 3D cell culture characterization techniques is that one-dimensional assays lose spatial end-points, while traditional wide-field and confocal microscopy only characterize the periphery of these models due to light attenuation. This is problematic and biases data as only the periphery of these models is being used for characterization today in image-based end-point assays which bias results, as the exterior is most exposed to the compound of interest. It was shown that by combining a plate-compatible tissue clearing technique with laser high content confocal microscopy that entire 3D cell culture models could be characterized in their entirety. This ability to characterize all of the cells within these models allowed for the analysis of cell proliferation as a function of depth which provides useful information about the kinetics and penetration of compounds and antibodies. 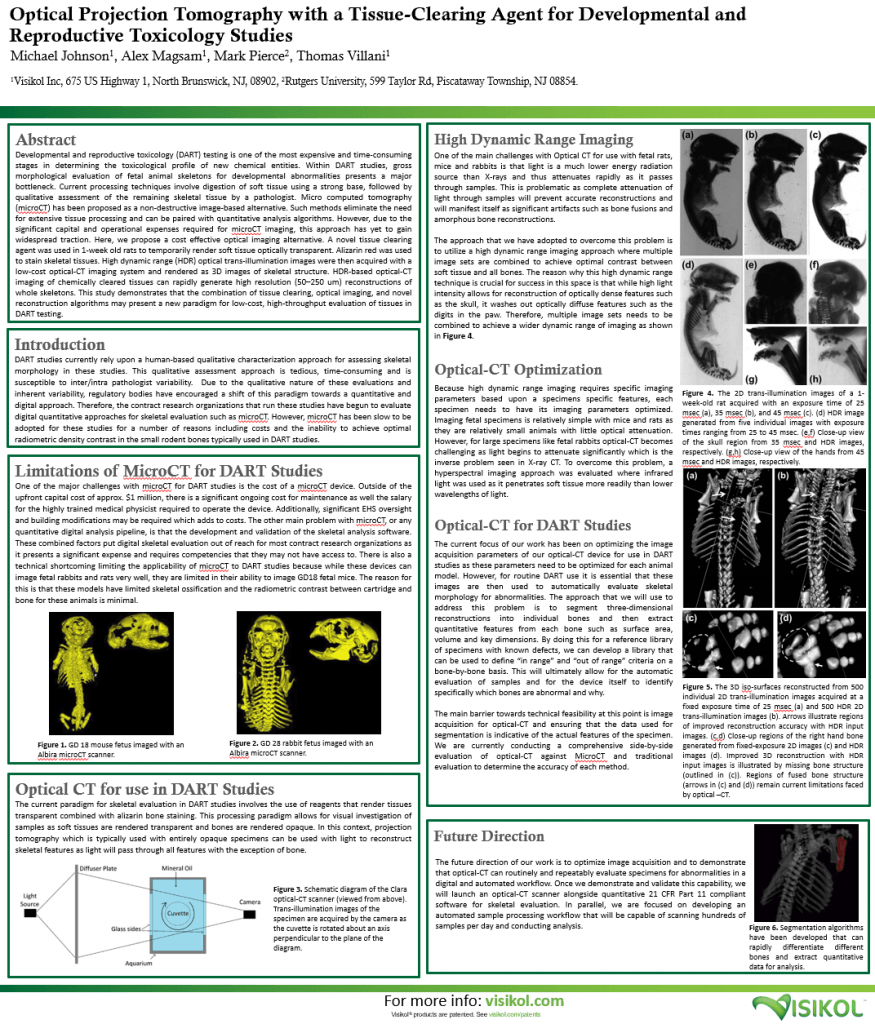 Developmental and reproductive toxicology (DART) testing is one of the most expensive and time-consuming stages in determining the toxicological profile of new chemical entities. Within DART studies, gross morphological evaluation of fetal animal skeletons for developmental abnormalities presents a major bottleneck. Current processing techniques involve digestion of soft tissue using a strong base, followed by qualitative assessment of the remaining skeletal tissue by a pathologist. Micro computed tomography (microCT) has been proposed as a non-destructive image-based alternative. Such methods eliminate the need for extensive tissue processing and can be paired with quantitative analysis algorithms. However, due to the significant capital and operational expenses required for microCT imaging, this approach has yet to gain widespread traction. Here, we propose a cost effective optical imaging alternative. A novel tissue clearing agent was used in 1-week old rats to temporarily render soft tissue optically transparent. Alizarin red was used to stain skeletal tissues. High dynamic range (HDR) optical trans-illumination images were then acquired with a low-cost optical-CT imaging system and rendered as 3D images of skeletal structure. HDR-based optical-CT imaging of chemically cleared tissues can rapidly generate high resolution (50–250 um) reconstructions of whole skeletons. This study demonstrates that the combination of tissue clearing, optical imaging, and novel reconstruction algorithms may present a new paradigm for low-cost, high-throughput evaluation of tissues in DART testing.