Understanding pancreatic β-cell function in the regulation of glucose homeostasis and metabolism is of paramount importance in the research of the most common human metabolic disease – diabetes. Although isolated primary islets are considered the gold standard tool of diabetes research, their experimental use is limited due to their inherent heterogeneity in size, cellular composition and purity, as well as their rapid decline in functionality and viability ex vivo.

The ability of the small molecule harmine to activate β-cell proliferation in vivo is a well-established phenomenon and, for this reason, has initiated interest developing analog compounds to treat diabetes. This in turn has given rise to interest in the development of high-throughput screening (HTS) assays to survey the efficacy of these drugs in in vitro models of pancreatic islets.

In this study, we combine the 3D InSight™ Human Islet Microtissues provided by InSphero and the Visikol HISTO-M tissue clearing reagent to illustrate the power of tissue clearing on high content screening (HCS) of novel drugs targeting β-cell proliferation.

Treatment of microtissues with antiproliferative cisplatin

3D InSight™ Islet Microtissues were prepared from human islets (Age 29, Male, Hispanic, BMI 22.17, HbA1c 5.5%) and delivered in an Akura™ 96 well plate. Medium exchanges were performed every 2 days to maintain the microtissues in culture. On day 19, a 4.5-day treatment with 10 µM Harmine was started, with re-dosing after 2.5 days. Harmine was dissolved in DMSO to make a 10 mM stock solution, and a vehicle control was treated alongside for comparison.

The islet microtissues were treated with harmine at a concentration known to induce significant proliferation in dispersed islets cells (10 µM). After intervention with harmine, the effects on islet function were studied. Harmine did not alter the basal levels of secretion at 2.8 mM glucose. Similarly, stimulated  secretion levels were maintained in harmine treated islets, reflecting unaltered β-cell function. However, harmine induced a significant reduction in the levels of total content (Figure 1).

Detection and Quantification of Proliferating β-Cells

In order to probe the effect of target compounds on the β-cell population within pancreatic islet microtissues, it is necessary to be able to quantify that sub-population of cells within the tissue and determine whether or not a significant increase in proliferation has occurred. For this, PDX1 (transcription factor associated with β-cell maturation) was identified as the appropriate biomarker label to detect β-cells and anti-Ki67 was used for labeling the proliferating sub-population along with DAPI to counterstain for all nuclei. The population of proliferating β-cells as well as total proliferating cells within each islet microtissue were then quantified by colocalization of the three signals. Both PDX1 and Ki67 are localized within the nucleus of the cell, making identification and colocalization with one another along with the DAPI signal a straightforward analysis. 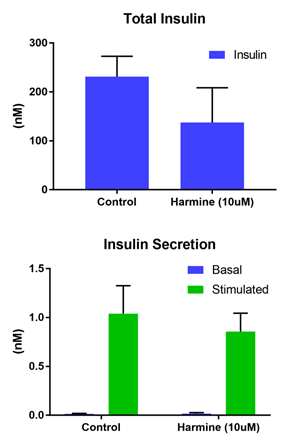 The image montages for both control and harmine-treated tissues (Figure 1) show the number of cells positive for Ki67 increases substantially between the two example image sets. A total of 12 tissues for each condition were surveyed such that statistical analysis could be performed and the summarized average total cell counts visualized (Figure 2). The tissues that were treated with harmine on average exhibit a 10-15X fold change increase in proliferating cells (with p-values for Ki67+ only = 10-6, and for Ki67+/PDX1+ = 10-5). 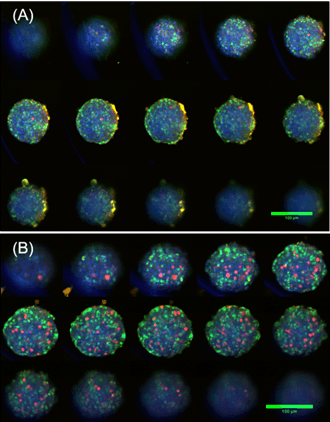 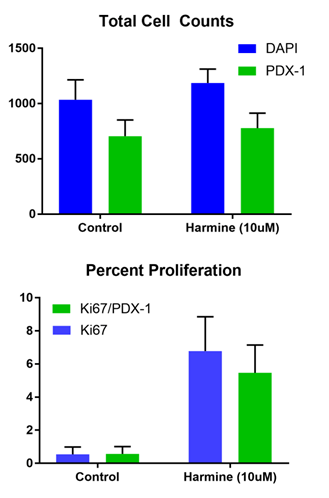 When conducting confocal imaging of microtissues without clearing, only the outermost cells are detected due to light scattering that reduces signal to noise. Use of a tissue clearing agent greatly increases the number of cells detectable by high content imaging and eliminates the need to do time-consuming and technically challenging IHC of microtissues. The non-adherent surface coating of InSphero assay plates was chemically compatible with Visikol HISTO-M. The clearing process takes only minutes and is done within the well plate.

1. Email us at info@visikol.com to discuss your research project.

3. Collaborations begin with pilot projects which can then be scaled up according to your requirements.

4. We work end-to-end to help you take advantage of 3D High Content Imaging assays in your workflow.