With the advent of cost effective culturing approaches, 3D cell culture models (3D-CCMs) have been rapidly adopted for drug discovery since they provide a more physiologically relevant micro-environment; showing improved predictive utility for assessing drug efficacy and/or toxicity when compared to traditional 2D monolayer models. High content analysis/screening (HCA/HCS) also plays major role in drug screening, but one of the unique challenges of evaluating 3D-CCMs (i.e. spheroids, organoids, micro-tissues, organs-on-a-chip) is their opacity and thickness that limit optical imaging to only the outermost layers (~20-30 microns). Since the outermost cells are exposed to different physiological test conditions (oxygen, nutrients, media exchange, drug dosing), current image-based approaches induce a bias in the results since the outer layer of cells are found in a significantly different micro-environment than the interior. This shortcoming is particularly problematic when ascertaining the relative effectiveness of current therapeutic agents (e.g. immunoglobulin-based therapeutics, anti-proliferatives) since their effects are likely to be localized or concentrated to the surface while their efficacy within the interior are obfuscated and not fully resolved. Visikol has shown that through the addition of high content confocal microscopy with the Thermo Scientific™ CellInsight™ CX7 LZR High Content Analysis Platform and the Visikol® HISTO-M™ 3D Cell Culture Clearing Reagent that the entire population of cells within 3D-CCMs can be characterized. 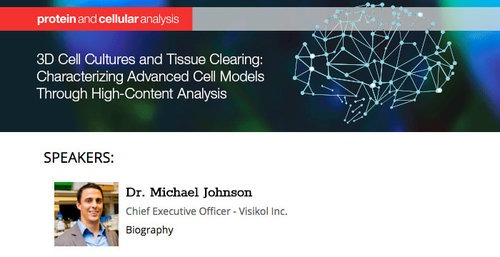