When combined with high-content confocal microscopy and commercially available viability reagents, Visikol® HISTO-M™ allows the interior environment of 3D cell cultures to be imaged, facilitating the detection and quantification of a necrotic core in large HepG2 spheroids. Spheroids larger than 200 µm in diameter present a necrotic core, indicated by higher frequencies of centralized, non-viable cells.

Given their low-cost and high-throughput nature, multicellular spheroid models have become a mainstay in high content screening approaches to drug discovery and development in various physiological and pathophysiological contexts. For example, multicellular spheroids have been generated from cancerous cells to screen potential chemotherapeutic agents[1], hepatocytes to screen for drug-related liver toxicity[2], and even isolated primary cells from the human cortex to study drug penetration into the blood brain barrier[3]. Given the crucial nature of cell viability in assaying the cytotoxic effects of therapeutic candidates in these various contexts, a reliable determination of the frequency and distribution of non-viable cells is necessary for the establishment of a baseline in newly developed models and for determining the localization of cytotoxic effects in treated models[1].

HepG2 cells were maintained in Advanced DMEM, supplemented with 5% fetal bovine serum, 1x GlutaMAX and 1x antibiotic-antimitotic in a humidified, 37°C, 5% CO2 incubator and passaged via light trypsinization with 0.05% trypLE and 1 mM EDTA upon reaching 80% confluence. Trypsinized cells were resuspended in complete medium and 5 x 102 – 16 x 103  cells were plated in each of 96 wells of a Corning Round Bottom Ultra Low Attachment Spheroid Microplate. Spheroids were maintained under standard culture conditions for 4 days, exchanging half of the media volume with fresh complete media after 2 days.

Spheroids were washed twice with 1X D-PBS, and a 1:1000 dilution of Thermo LIVE/DEAD Fixable Green Dead Cell Stain (reconstituted according to manufacturer’s instructions in 1X D-PBS) was added to each well. Following 45 minutes of room temperature incubation with the LIVE/DEAD staining solution, spheroids were washed twice with 1X D-PBS, fixed with 10% neutral buffered formalin and permeabilized with 0.2% Triton, each for 30 min at room temperature. Fixed spheroids were then stained with a 1:5000 dilution of DAPI in Visikol HISTO Antibody Buffer for 1 h at room temperature.

Stained spheroids were washed twice with Visikol HISTO washing buffer, once with  deionized water, once with 50% methanol in deionized water, and once with 100% methanol. For clearing, as much methanol as possible was removed from the well, and Visikol HISTO-M was added to each well for subsequent imaging on a CX7 LZR High Content Confocal Imager. Z-stacks were collected for each spheroid, using 10 µm steps. Image analysis was performed using both custom ImageJ macros and CellProfiler.

Larger spheroids result in the appearance of a necrotic core

While the percentage of viable cells did not precipitously drop with increasing cell seeding densities (Fig. 2A), the localization of non-viable cells qualitatively differed (Fig. 1). Accordingly, we quantified the mean distances from the spheroid center of each DAPI and Fixable Dead Cell Stain-positive cells. As expected, the average distance from the center of both total and dead cells increased with increasing seeding density (Fig. 2B). However, when taking the ratio of the average distance of the dead cells from the spheroid center to the average distance of all cells from the spheroid center, the ratio is inversely proportional to the number of cells seeded, suggesting the development of a necrotic core with spheroid size. The ratio drops below 1 at seeding densities above 1000 cells. Given the diameter of spheroids at this size, this data suggests the development of a necrotic core for HepG2 spheroids larger than 200 µm in diameter. 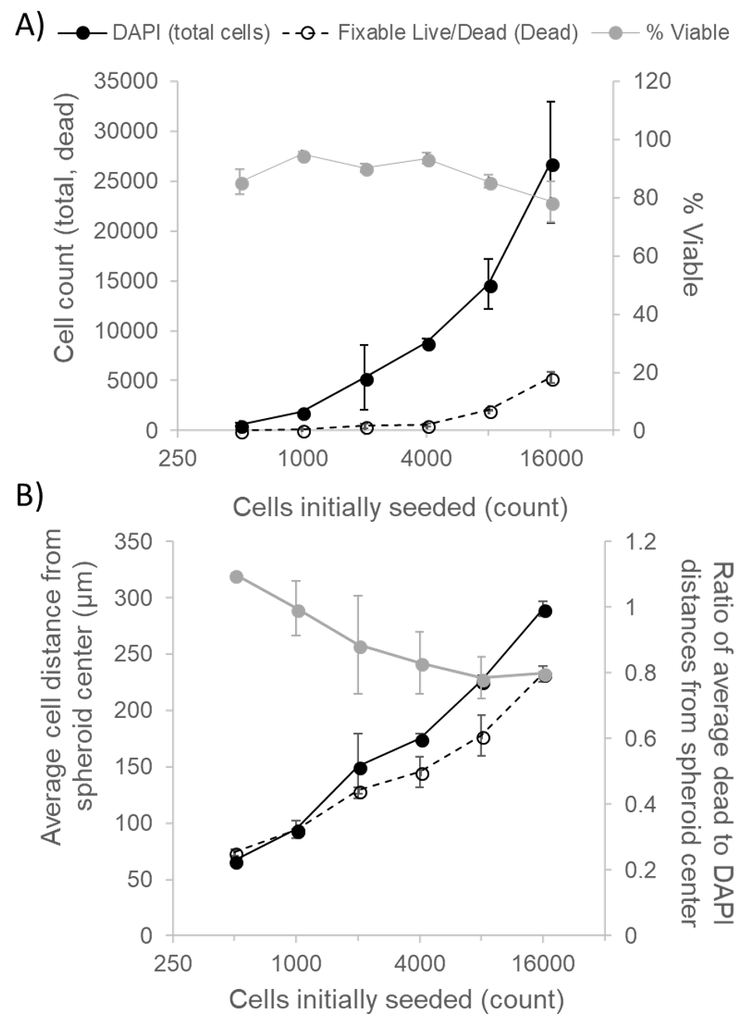 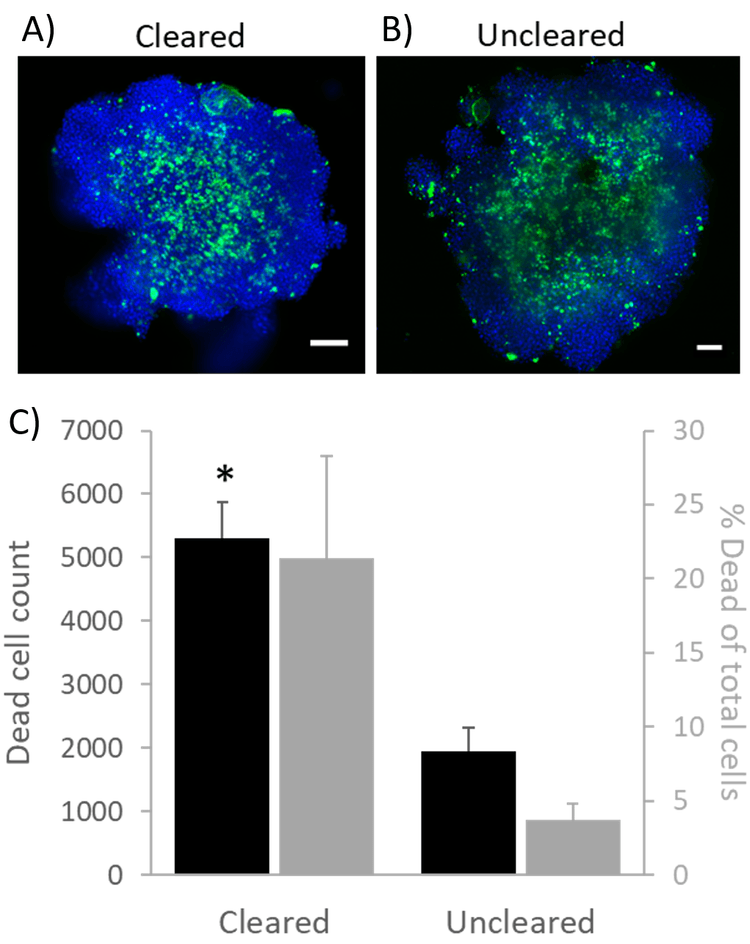 Figure 2 (A) Total and dead cell counts and percent viability of HepG2 spheroids, determined from confocal z-stacks. (B) Mean distances of total cells and dead cells, calculated from spheroid center as well as ratio of these distances. Data represent mean values ± SEM for independently imaged spheroids.