Visikol’s Histo clearing reagents are often used in histological research and cell imaging. Due to the versatility and wide range of uses for Visikol’s products, they can often be found in many different fields of scientific research. Stem cell research is a field of scientific research that has been gaining interest and proliferating in recent years. Researchers at Johns Hopkins University’s neurology department conducted a study recently involving human pluripotent stem cells and their potential use as a treatment for degenerative muscle disorders. Visikol’s Histo line of products was used for the 3D imaging of the stem cells. 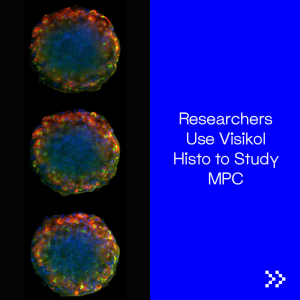 Can MPCs Be Used to Promote Muscle Regeneration?

The study uses a specific derivative of Human Pluripotent stem cells (hiPSC) called myogenic progenitor cells (MPC). This study aimed to prove the usability of MPCs to promote muscle regeneration when engrafted in lab mice. The hope is that this study will be used as a “proof of principle” for future cell therapies using pluripotent stem cells and their derivatives. For these therapies to work, the MPCs must differentiate into what is known as a satellite cell. These satellite cells must then remain dormant until muscle degeneration is detected, and, in that case, they would repair the damaged myofibers. A portion of these satellite cells stays behind post-injury to maintain and self-renew the cell pool allowing future regeneration of damaged tissue. This self-renewal property is part of what makes cell therapy so promising.

The first process outlined in the study was the process of cell engraftment. A specific version of stem cells called PAX7::GFP (Green Fluorescent Protein) hESC was created using CRISPR-Cas9-mediated knock-in. A myogenic specification protocol then turned these stem cells into PAX7::GFP-expressing MPCs. These cells were expanded in vitro for seven days with around a 30 percent MPC retention rate, while a portion of the others differentiated into other cells.

Two transplantation strategies were tested to engraft the cells, one without FACS (fluorescence-activated cell sorting) and one with FACS. Immunodeficient mice had their tibialis anterior muscles depleted of host satellite cells for the engrafting experiment. Muscle fibers were then also damaged using 1.2% BaCl2. Muscle fibers formed by donated cells were labeled with human-specific antibody dystrophin, and the secreted extracellular matrix was labeled with laminin. The PAX7::GFP MPCs that saw the most regeneration were the ones that had been sorted using FACS. The MPCs that did not utilize FASC sorting did not see significant regeneration compared to the control group.

After successful transplantation, researchers then needed to determine if these MPCs could occupy the satellite cell space and regenerate myofibers. Antibody markers were used to determine if regenerated myofibers or satellite cells were, in fact, from the MPCs. Human-specific antibodies were used for marking so recovered cells could then be tested using a PCR for their human-specific markers to prove they were not of mouse origin. Images of these cells were also made using Visikol Histo and Visikol Clearwells to get a clearer picture of the tagged cells and where they were located. This study was a success; engrafted hPSC-MPCs were able to occupy the satellite cell space and regenerate myofibers when damaged. These cells were examined using RNA sequencing to determine if they could reach a quiescent state. The engrafted cells often had smaller RNA sequences than their in vitro counterparts suggesting they are in a quiescent state. If you are interested in Visikol Histo products for your lab or research projects, please reach out to the Visikol team.