While axons in the peripheral nerve tend to regenerate well, central nervous system axons have issues regenerating post-trauma. In a recent study by the Kirby Neurobiology Center at Boston’s Children’s Hospital, they looked to uncover multiple transcriptional pathways that could eventually be used to remedy the lack of retinal ganglion cell survival and axon regeneration in the central nervous system space. Studies like these hope that one day we can better understand and maybe even treat axonal degeneration in the central nervous system. The implications of such a breakthrough could help combat the effects of many neurodegenerative diseases by helping regenerate the axons after they have already seen significant damage. 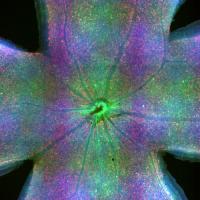 In the study, three different transcriptional pathways were highlighted. These included the deletion of genes encoding phosphatase and tensin homolog, the suppressor of cytokine signaling 3 (SOCS3), and delivery of ciliary neurotrophic factor (CNTF). Each of these pathways has shown promise in enhancing retinal ganglion cell survival and axon regeneration. The method for the experiments in this study involved high throughput single-cell RNA sequencing. Three separate classes were made involving uninjured, injured, and treated RGCs and were classified into 46 types using the most recently described criteria. Injured ganglion cells were damaged using optical nerve crush (ONC); this type of damage leads to the gradual death of the retinal ganglion cells and causes direct damage to the axons. After the experiments were completed, the results were compared in different ways. RGC’s that regenerated axons were compared to those that survived but didn’t regenerate axons to see if specific interventions promote regeneration of a particular type. Then, to analyze gene expression, five independent computational methods were used to analyze expression by RGC type, state, time since injury, and intervention, to see if any patterns emerged among these variables. Using these methods, three groups of genes emerged, one that was associated with RGC’s destined to die, one with RGC’s that could live but not regenerate, and another with RGC’s that could both survive and regenerate axons. Researchers used Visikol’s Histo to assess whether axons regenerated. Axons were labeled by intravitreal injection, perfused with 4% PFA, and were post-fixated overnight in the 4% PFA. Nerves were removed from the meninges and cleared using Visikol’s Histo-1 and Histo-2 solutions using Visikol’s clearing protocol. Images were then created using a confocal microscope for analysis.

This study proved multiple pathways that could be potential targets for therapeutics research on RGC and axon regeneration. The elucidation of these pathways could serve as a proof of concept for future studies that look to discover drugs to regenerate RGCs and their axons post-injury. If you are interested in learning more about Visikol’s clearing reagents, feel free to reach out to our team today.