Every week we see a new company or publication describing an advanced in vitro system for replacing the use of animal studies and traditional in vitro models throughout the drug discovery and development process. These systems leverage advances in stem cell engineering (i.e. iPSCs), bio-printing, microfluidics, CRISPR and almost every other buzzword you can think of to augment how therapeutics are developed and tested. The rationale for these models is that traditionally there has been a poor translational gap between in vitro models and in vivo results wherein billions of dollars could be saved if inexpensive in vitro models could be developed that accurately mimicked in vivo systems and thus predicted in vivo results. While these novel approaches are very exciting and certainly appeal to the inner science fiction geek within all of us, the actual utility of these models is very far from what is advertised.

As a drug discovery CRO, we evaluate novel cell culture systems almost on a weekly basis to see if there are benefits that are conferred by these systems which can enable our Clients to more effectively answer their research questions. A core problem with most of the advanced in vitro systems being developed is that they have not shown a translational benefit to their technology. For example, in the context of drug induced liver injury (DILI) screening, several companies have developed systems which provide longer culture times and better maintenance of key enzymatic activity (e.g. CYPs) when compared to traditional spheroid culture in Corning ultra low attachment (ULA) plates. While certainly academically interesting and potentially valuable, in order for a model to be utilized during the drug discovery and development process, it needs to confer demonstrated value and this is where most of these novel cell culture systems break down. Though they may have more relevant biology (e.g. iPSCs), simulate flow (e.g. organs on a chip) and have more relevant cellular organization and extra-cellular matrices (e.g. bioprinting) than simpler models, these features might not actually confer any improved translational value.

Typically, we see proven translational improvement as the main limitation of these novel models as the developers of these technologies generally have worked very hard to better mimic the natural in vivo micro-environment but they have not typically demonstrated that this improves the utility of the model. For example, in the DILI space to actually shift an assay from a current practice to a novel model requires that the model is validated and is able to at the very least predict the toxicity for compounds with known in vivo toxicities as well as the current standard which in many cases is 2D primary human hepatocyte culture.

When reviewing novel models, we often see for example microfluidic systems which perhaps could have improved relevancy compared to traditional 2D and 3D cell culture models but conversely are only available in 12-well systems and require extensive equipment to operate which makes their cost 100X higher than traditional systems. Additionally, more complicated models make validation exponentially more challenging which in turn can actually reduce the specificity and accuracy of these models. For example, iPSC differentiation can lead to two very different models when performed by different technicians and plastics that comprise complex microfluidic systems can absorb therapeutic compounds of interest which has been shown with the PDMS-based Emulate platform.

At Visikol, we are highly focused on providing our Clients with the best in vitro models for their research questions and we work closely with our Clients to understand their specific needs in defining a model. For example, if we are working with a Client in evaluating NASH amelioration with small molecule treatments, we could use several different types of liver models (e.g. HepG2, PHH/NPC, HepaRG) to study different aspects of the disease. This approach allows us to maximize throughput and minimize cost while only adopting more complex and expensive models when their improved in vivo relevancy is absolutely required. 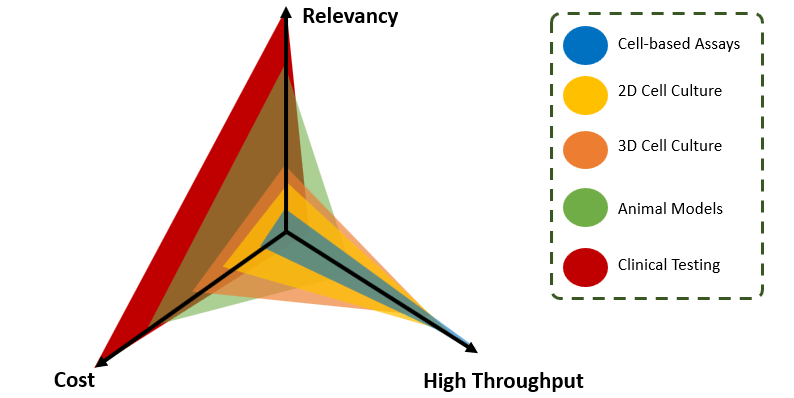