Creating 3D representative figures from confocal microscopy can be extremely useful for illustrating holistic views for any subject of research. Visikol is constantly expanding its 3D models and currently offers organoids, microtissues, and spheroids as part of its drug discovery services. This article will walk through some routine tools used to create 3D figures of a Retinal Organoid, used for fibrosis assays.

A “Hyperstack” in is a multi-channel/multi-slice image, much like an RGB image, but the contrast of each channel can be altered. To create a hyperstack, you must note the number of channels and the z-steps. This example is an organized 16-bit, 4-channel image with 44 z-steps. Since stack order increases by channel, then z-step, choose the default option in drop down menu of the Stack to Hyperstack Function [Image–>Hyperstacks].

Figure 1. User input for creating a hyperstack and a resulting slice of the composite image.

The Orthogonal Views tool [Image–>Stacks] is the quickest way to create transverse and coronal views of data.  Unless you’re using cubic voxels, your data most likely will be “squished”. This is because z-steps are usually at a lower resolution than the pixel resolution for microscopy. To address this, you simply need to change the z-step size via the image Properties menu [Image–>Properties]. After re-running the Orthogonal Views function, the aspect ratio of the voxels will be stretched in the z-direction (Figure 2).  By eliminating the restriction of working within a single view, we can distinguish patterns and features that we would otherwise miss. 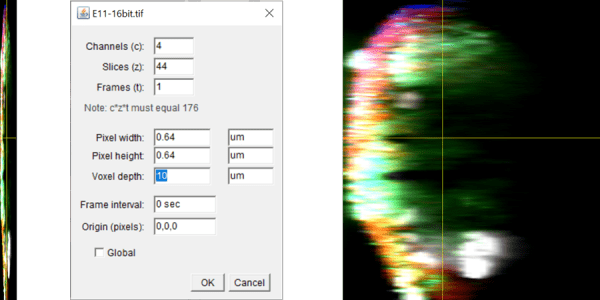 One of the most challenging obstacles when dealing with microscopy data is confocal bleeding and autofluorescence artifacts. This residual signal needs to be removed or the rendering will include a halo that could lead to misinterpretation. There are many ways to tackle this, such as advanced filters and mask applications, but for the novice imageJ user you’re only a few clicks away!

For this method, lower end of the histogram is clipped, and a new lookup table was created each channel via the Brightness & Contrast tool [Image–>Adjust]. Although this tool is finicky, the procedure is extremely simple. All you need to do is adjust the Minimum slider to remove the halo towards the top of the stack, and optionally adjust the Maximum slider to improve contrast for the entire stack (Figure 3).  This may take a few attempts, and it is suggested you take note of the upper and lower thresholds at each channel. Once the image is to your liking, make this a permanent change by converting the image type (Image–>Type–>8bit). ImageJ will snip above and below the thresholds indicated on each histogram and stretch the remaining values within 8-bits. The dataset is now ready for volume rendering (Figure 4).

Figure 3. Left: The original 16-bit image where the halo has not been removed. Center: The clipped 16-bit histogram and the resulting 8-bit histogram. Right: The same z-slice with the halo removed. Note that the histrogram is now stretched.

The 3D capabilities supported in imageJ are growing as the demand for 3D data analysis increases in various areas of research.  ImageJ is one of many tools Visikol uses on its mission to refine existing and develop new 3D assays. If you have any questions about the developing a custom 3D pipeline for your path to drug discovery, do not hesitate to contact Visikol today.

Figure 4: User input for the 3D Viewer [Plugins], and the resulting volume rendering of the hyperstack.