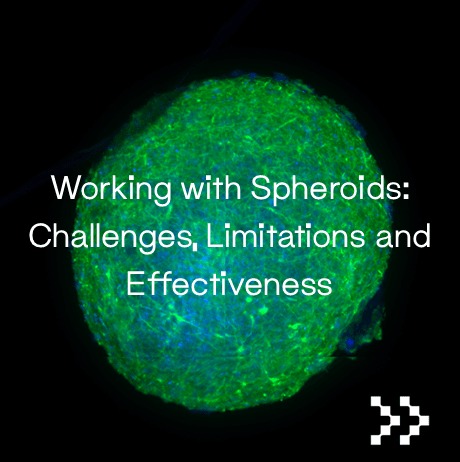 When working on drug discovery and assay development, scientists often use models that can help mimic the effects of the drugs of interest. This can range from 2D models in a plate, trans-well models with cell suspension and 3D models such as spheroids or organoids. Spheroids are a miniature unit that mimics what a tumor is and is quick and easy to grow compared to an organoid, which is a 3D structure that has grown to replicate the size and the shape of the organ of interest.

It is useful to have spheroids and use them in various experiments. Cells take about 48 hours to form spheroids once plated into a ULA round bottom plate, however this is dependent on the cell line. As some cell structures are not all uniformly congruent, this can impose challenges in even distribution of drug dosing, varying penetration rates and structural deformities. This poses the need for an effective way to make spheroids to induce the effects the drug has on the cells.

To ensure the correct usage of the cell in a spheroid format, it is encouraged to do an initial plating onto a ULA plate to encourage natural spheroid formation. An example of such case is that when specific cell lines are known to have non-symmetrical shapes. Some examples are of A549 cancer cell line, which has an elongated shape and is not known to form round spheroids. However, doing an initial run on the cells for 48 hours to determine the final shape of the spheroids is deemed helpful when planning to run tests on them.

Using spheroids in drug discovery research is like managing a small-scale cancer in an organism. Although utilizing spheroids is in vitro, this tool is effective in giving a better idea on how to move forward with dosing, assay procedures and implementing data on patients later down the road.

Visikol incorporates spheroids as an essential part of drug discovery, and it allows clients to understand the physiology of the cells of interest as they come together to mimic a miniscule version of a tumor. Using various techniques and previous experience handling cells to form spheroids, Visikol can provide an in-depth service in cell culture assays as well as offering many other types of services. To learn more about Visikol’s assays and various testing services, please reach out.