The use of three-dimensional (3D) cell cultures for in vitro drug discovery assays has increased dramatically in recent years because 3D cell culture models more accurately mimic the in vivo environment compared to traditional two-dimensional (2D) monolayer cultures. However, current imaging-based analysis of these 3D cultures relies upon techniques originally developed for 2D cell culture, and as such, has significant limitations. Specifically, the light scattering inherent with thick microscopy specimens prevents imaging the entirety of a 3D spheroid, which are typically >100 µm in diameter. This technical limitation introduces a sampling bias in imaging analysis in which only the exterior cells of a spheroid can be imaged. To accurately survey the cellular environment and response of the spheroid, the field needs new techniques to overcome the sampling bias. Accordingly, we sought to remedy the light scattering caused by 3D spheroid opacity by employing an optical clearing agent designed specifically for spheroids, Visikol® HISTO-M™. Here, we demonstrate the utility of Visikol HISTO-M tissue clearing with HepG2 spheroids generated in Corning 96-well spheroid microplates in a high-content screening approach.

Generation of Spheroids in Corning Spheroid Microplates
HepG2 cells (Sigma Cat. No. 85011430) were routinely cultured in DMEM supplemented with 10% FBS. To form spheroids, HepG2 (1 x 103 cells/well) were seeded into wells of 96-well spheroid microplates (Corning Cat. No. 4515) and incubated in a humified incubator in 5% CO2 at 37°C for 2 days.

Treatment of Spheroids with Antiproliferative Compound
A 1 mM stock solution of the antiproliferative compound paclitaxel (Alfa Aesar Cat. No. J62734MC) was prepared in DMSO. Working solutions (100X) were prepared as 10-fold serial dilutions of the DMSO stock and then diluted to final assay concentration (1 µM, 500 nM, 100 nM, 10 nM, 1 nM) in growth media. Spheroids were treated with paclitaxel on day 0 and again on day 3.

Spheroids were cleared with Visikol HISTO-M. Briefly, this is accomplished through dehydration of the spheroids by exchange with methanol (200 µL/well for 15 min.) and subsequent exchange and transfer to the one-step immersion clearing formula, HISTO-M, for immersion clearing (200 µL/well for 30 min.). Spheroids were imaged in HISTO-M in the spheroid microplate with an IN Cell Analyzer 6000 (GE Healthcare). Z-stacks (~150 µm) were collected at 10X magnification in 5 µm steps. Images were processed using ImageJ, and DAPI+ and Ki67+ cells were counted using CellProfiler.

Visikol HISTO-M Enables Visualization of Spheroid Interior
Figure 1A (top rows) feature images representative of the obstacles encountered when imaging 3D cell cultures. The interior of the spheroid appears dark, as light scattering drastically reduces fluorescence signal due to the opacity of the spheroids. Signal is only detected from the outermost cells of the spheroid. In contrast, light scattering was greatly reduced by using Visikol HISTO-M clearing agent, as evidenced by more visible nuclear fluorescence in the cleared spheroids (Figure 1A, bottom rows). This allows for comprehensive profiling of the interior of the spheroids.

In fact, the Visikol HISTO-M cleared samples showed increased sensitivity in detecting inhibitory activity with significant inhibition detected at 1 nM paclitaxel compared to 100 nM required to detect signal for noncleared control samples (Figure 2B). The IC50 value measured for spheroids cleared with Visikol® HISTO-M (7.01 nM) was approximately 4X lower than calculated with non-cleared control samples (29.6 nM). The increased sensitivity in cleared samples can be attributed to detection of inhibitory effects in cleared spheroids that would be obscured from detection without tissue clearing. Therefore, tissue clearing with Visikol HISTO-M eliminates the sampling bias to yield data more representative of the entire spheroid and potentially more physiological. 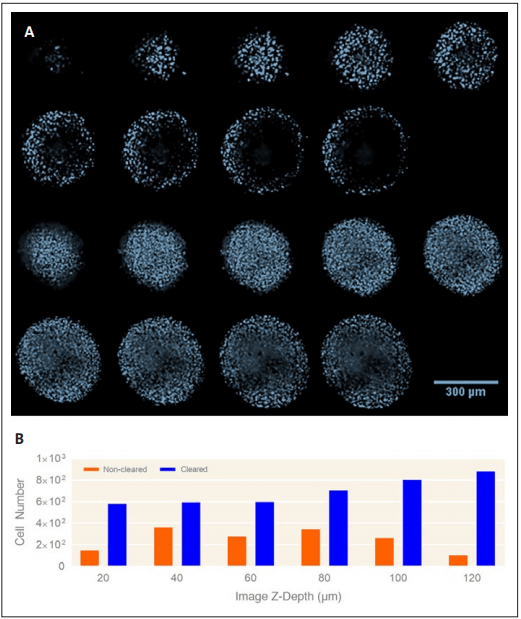 By sampling the entire spheroid, additional downstream analysis of microenvironments within the 3D structure is made possible. Data obtained from cleared spheroids can be segregated into groups based upon distance from the center of the spheroid to generate site-specific dose response curves. This allows for the investigation of potential differential response in cell proliferation due to different cellular microenvironments. In the current study, this was accomplished by calculating the center point of each of the Ki67+ nuclei detected. The center point of each spheroid was calculated as the average coordinates of the DAPI+ nuclei center points. The data were then grouped according to relative distance of each cell to the center, segregating cells into 3 concentric shells: the outer third (furthest from the center), the middle third, and inner core of cells. These data were then used to construct the spatial dose response curves shown in Figure 3.

Corning® Spheroid Microplates Enable Higher Throughput Imaging
Traditional flat-bottom fluorescent assay microplates suffer from two major drawbacks. First, spheroids cannot be cultured directly in the assay plate which necessitates transfer of spheroids and results in lower throughput capacity and loss of data. Second, significant time is required for the high-content imager to detect the relatively small diameter spheroids (~300 µm) in large 5 mm diameter wells, especially at higher magnifications. This also contributes to a significant loss in assay throughput. Corning spheroid microplates allow generation and analysis of spheroids within the same plate and so, were critical to our successful high-content imaging of spheroids.

Corning spheroid microplates are black/clear-bottom microplates available in 96-well (Corning Cat. Nos. 4515 and 4520), 384-well (Corning Cat. Nos. 4516 and 3830), and 1536-well (Corning Cat. No. 4527) formats, all of which are compatible with automation systems. The Ultra-Low Attachment (ULA) surface is a hydrophilic, biologically inert, and non-degradable coating covalently attached to the interior surface of the well-bottom and promotes self-assembly of plated cells into 3D aggregates. The unique well geometry enables formation of single spheroids of uniform size across the microplate. Importantly, spheroids tend to settle in the bottom of the unique U-shaped wells which simplifies and accelerates the imaging process, as less time is required to scan the well to find the spheroid. The opaque side walls and proprietary gridded plate bottom design reduce well-to-well cross-talk and background fluorescence/luminescence. Ultimately, the novel and proprietary design of the spheroid microplates positions them as an ideal tool for high throughput analysis of 3D cell cultures. 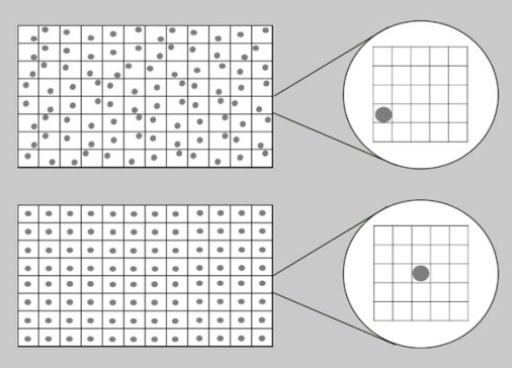 Furthermore, the Corning® spheroid microplates are chemically compatible with Visikol® HISTO-M clearing. The Visikol clearing process, which takes only minutes, can be done within the spheroid microplate wells. The present study demonstrates the advantages of tissue clearing in imaging analysis of spheroid cultures. Namely, clearing of spheroids allows for query of the entirety of the 3D structure and, thus, a more thorough analysis of the microenvironments within the spheroid. In short, uniform spheroids can be reproducibly generated and cultured, labeled, cleared, and imaged in Corning spheroid microplates without the transfer of spheroids, ensuring a comprehensive data set without the loss of information or throughput