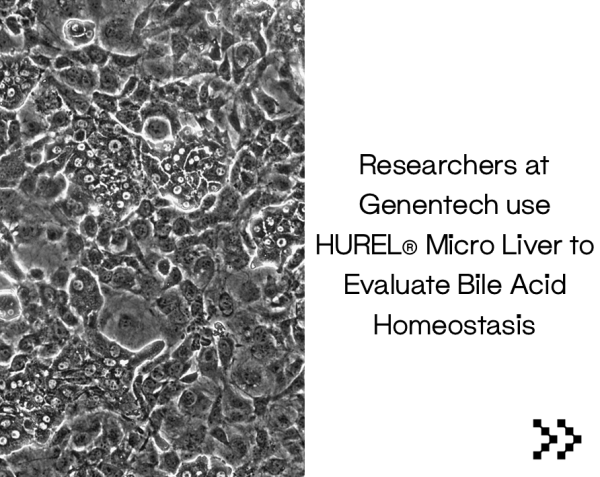 HUREL® Micro Liver primary hepatocyte models have been used in labs worldwide and have shown their functionality and viability as a cell model for the expedition of drug research. Liver toxicity is one of the leading causes of drugs being withdrawn from testing or the market, so having a viable cell model to test for hepatotoxicity is essential in determining the overall safety and efficacy of a given drug. Drug-induced liver injury (DILI) is often thought to be caused by an unbalance of bile acids and the levels of bile acids when under the effect of certain drugs can be a prospective biomarker to assess for risk of liver injury. Researchers at Genentech in San Francisco recently used the HUREL® Micro Liver to evaluate the effect of different drugs on bile acid levels. This research shows the effectiveness and useability of the HUREL® Micro Liver platform and can also help explain how bile acid levels can be a biomarker for DILI. The study’s goal was to measure the effect of drugs with either a known or no known association with DILI and their association with bile acid levels.

In the study, HUREL® Micro Liver 24-well plates containing hepatocytes from single donor humans were used. For the experiment, troglitazone, a drug associated with DILI, pioglitazone, a drug that is rarely associated with liver defects, and acetylsalicylic acid (aspirin), another drug that is rarely associated with DILI, were used to test bile acid homeostasis. For the cytotoxicity assay setup, all three drugs and rotenone for positive control were plated and incubated for 72 hours. CellTiter-Glo reagent was added, and luminescence readings were recorded on a SpectraMax i3. LC-HRMS profiling was used to determine the bile acids and metabolites in samples. BA’s and their metabolites were measured in the supernatant and compared to known Human supernatant BA levels.

The results for these drugs within the HUREL® Micro Liver platform correlated well with the know properties for these drugs in vivo. Troglitazone was able to interrupt bile acid homeostasis by reducing glycine and sulfate conjugation. Pioglitazone was also able to interrupt bile acid homeostasis, but compared to TZN; it was 3-13 times less extreme depending on which particular bile acid was referenced. It is worth noting that there is more to DILI risk assessment than measurement of effect on bile acid homeostasis. Bile acid is also dependent on the gut microbiome, so we cannot perfectly measure the effect on bile acid without the gut’s added effect. If you are interested in learning more about the HUREL® Micro Liver platform as a product for use in your lab or an end-to-end service, please reach out to the Visikol team today.