The field of 3D cell culture models has grown considerably in the last decade. Cells, grown as monolayers (e.g. 2D models), are used routinely as model systems for evaluating the effectiveness and safety of potential drug candidates. Cell-based assays frequently determine crucial, ‘go/no-go’ decisions in the preclinical development of a drug candidate. Growing cells as 3D models is more analogous to their existence in vivo, and may be co-cultured with other cells and cellular components that occur in their microenvironment to better recapitulate the disease.

At Visikol, we recognize that 3D cell culture models have their own unique advantages and disadvantages and that these models vary widely in their complexity and ability to replicate in vivo functionality. Thus, we work closely with our Clients to define ideal models to utilize in screening to address their research question.

“Numerous studies have shown that cell responses to drugs in 3D culture are improved from those in 2D, with respect to modeling in vivo tissue functionality, which highlights the advantages of using 3D-based models for preclinical drug screens.”
Nam et al. Journal of Laboratory Automation

“Cells naturally grow in a 3D environment, [which] affects how they interact with each other and their microenvironment. In turn, these signals affect proliferation, differentiation, morphology and a range of cellular functions. Therefore, when drug candidates are being tested using cell-based assays, the culture methods used should mimic the most natural in vivo representative form possible. The most natural, tissue-mimicking method of cell growth for drug discovery applications is, arguably, 3D.”
Breslin & O’Driscoll, Drug Discovery Today

The rationale for 3D cell culture models is quite simple; biology does not occur in two dimensions and thus traditional adherent cell culture is limited in its ability to replicate the complex characteristics of the in vivo microenvironment, such as diffusion gradients, receptor expression, etc.  Because of these differences, the technique in which cells are cultured (2D vs. 3D) can substantially alter the drug’s effect on the cells. There are many examples in the literature regarding the substantial differences between cells cultured in 2D vs 3D format, a few of which are highlighted below.

“Cells grown as 3D spheroids using p-HEMA-coated plates had HER2 homodimers form; while in 2D cultures, HER2 formed heterodimers with HER3. Furthermore, in 3D versus 2D culture, epidermal growth factor receptor (EGFR) levels were slightly reduced; phosphorylation of HER2, HER3 and EGFR was enhanced; and activated Akt was downregulated” [1, 2]

We recently demonstrated that when the primary cell-derived Wood breast cancer cell line (Cellaria) was grown in 2D it did not express estrogen receptor (ER) as expected from immunohistochemical analysis of patient biopsy, whereas when grown in 3D, ER expression was recapitulated.

Differences in response to drug treatment

“When a fixed concentration of trastuzumab (a monoclonal antibody that targets HER2) was added to the cells, 2D cultures underwent approximately 16% reduction in proliferation, whereas proliferation in 3D spheroids was reduced by a considerable 48%. This indicates that the architecture of 3D spheroids differs from that in 2D and that the targeted anti-cancer drug, trastuzumab, has a dramatically different effect on cells grown in monolayer as compared to those in 3D, due to differences in the cell surface molecules and thus intracellular signalling events.” [1, 2]

Further study on the primary cell-derived Wood breast cancer cell line (Cellaria) indicated specific differences in the sensitivity of Wood cells to common antineoplastic agents indicated for breast cancer depending on whether they were cultured in 2D or 3D. Specifically, the Wood line showed little sensitivity to fulvestrant, an ER-targeting drug, in 2D format, but was exquisitely sensitive to the drug in 3D.

Thus, there is ample evidence to suggest that 3D cell culture models may be preferable for use in drug screening applications, when cost and throughput requirements permit.  For many research questions, 3D cell culture can improve the translational gap between in vitro results and what is expected in vivo. 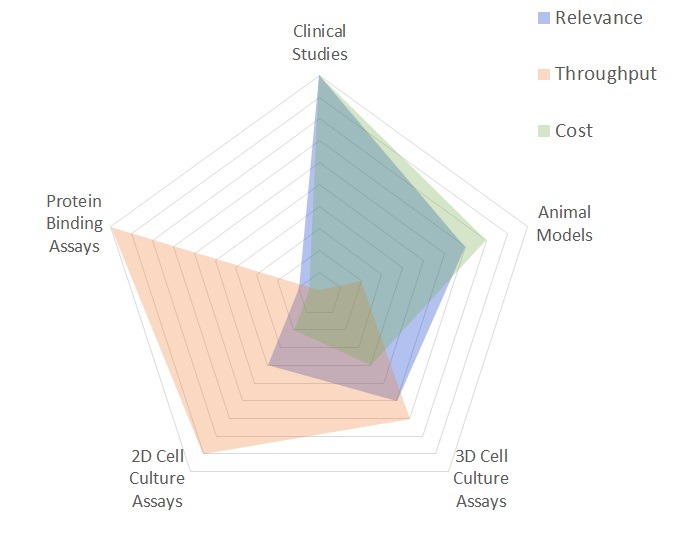 discovery process between 2D cell culture models and animal models, representing a compromise between throughput, relevancy, and cost offered by traditional techniques. Due to their increased replication of in vivo characteristics, 3D cell models offer an excellent format for confirming results of in vitro screening using 2D cells, and for screening hits and lead compounds for potential toxic liabilities. Furthermore, there are several assays which cannot be adequately conducted in monolayers, (e.g. measurement of antibody distribution, assessment of infiltration of immune cells)