As an expert in advanced imaging and image analysis, Visikol worked with researchers from the La Jolla Institute for Allergy & Immunology to investigate the detection of Zika virus in mice. In this paper researchers investigated whether the Zika virus could be transmitted from nursing mothers to their children via breast milk. Researchers used the Visikol HISTO approach was used to evaluate how Zika spread through mammary tissue and the heterogeneity of the virus within tissue. 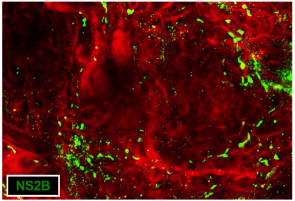 Researchers infected pregnant mice that were genetically engineered to be highly susceptible to Zika virus. This susceptibility was induced by creating deficiencies in type I & II interferon receptors. Type I interferon receptors play a role in initiating an antiviral response and innate resistance to infection; type II is involved in the regulation of specific immune responses. The Zika virus RNA was detected in the pup’s stomach milk clots (SMC) as early as 1 day and as late as 7 days post maternal infection. However, the presence of a virus RNA does not mean necessarily mean that the virus is active. In addition, researchers looked for the looked at ZIKV NS2B immunofluorescent immunohistochemistry (IHC) and for the cytopathic effect (CPE). ZIKV NS2B protein is a cofactor of the NS2B-NS3 protease which cleaves the viral polyprotein and is present during viral replication and therefore can be considered a marker of a replicating virus. CPE refers to the structural changes in host cells that are caused by viral invasion – notable markers for this phenomenon is the lysis of the host cell or cell death without lysis.

Neither the IHC or examination for CPE demonstrated infectious virus in fresh milk or in nursing pups. In contrast, ZIKV NS2B expression was seen in cells morphologically consistent in the mammary gland. However, no mastitis was seen histopathologically, which is the inflammation or swelling in the breast tissue, and normally caused by an infection. ZIKV NS2B expression was observed also in the SMC, and infectious particles were observed in fresh milk samples after 3 serial passages in Vero cells. Serial passage is the process of isolating the virus and growing it for a certain amount of time, then transferring part of the culture to a new environment and then growing for the same period. These results suggest that breast milk may contain infectious ZIKV. These results suggest a low risk for breast milk transmission of ZIKV and provide a platform for investigating ZIKV entry into milk and mechanisms which may prevent or permit breast milk transmission. In conclusion, researched found very low levels of intact Zika virus in mouse breast milk and found none of the nursing pups.

It’s important to understand the mechanisms behind breast milk transmission to prevent it. The result from this experiment lays the foundation to further study the ZIKV transmission from mother to offspring. Researchers proposed that the infectious ZIKV may enter breast milk, but milk’s natural defense components may inactivate the virus. These components could be endogenous or exogenous factors such as lipids or antimicrobial proteins. To learn more about Visikol’s HISTO reagents, reach out to us today.