Epigenetics is most commonly used to describe chromatin-based events that regulate DNA-templated processes. The information conveyed by epigenetic modifications plays a critical role in the regulation of all DNA-based processes, such as transcription, DNA repair, and replication. Epigenetic mechanisms, which include DNA methylation (and demethylation), histone modification, and microRNA, can produce heritable phenotypic changes without a change in DNA sequence. Disruption of gene expression patterns which are governed by epigenetics can result in autoimmune diseases, cancers, and various other malformations.

With the advent of high-throughput sequencing technologies as well as techniques requiring very small amounts of biological samples, testing of epigenetic status of individual patients is now common. The coupling of next-generation sequencing (NGS) platforms with established chromatin techniques such as chromatin immunoprecipitation (ChIP-Seq) has presented us with a previously unparalleled view of the epigenome. These technologies have provided comprehensive maps of nucleosome positioning, chromatin conformation, transcription factor binding sites, and the localization of histone and DNA  modifications. The emerging tools of epigenetics can be used as preventive, diagnostic, and therapeutic markers. The targetable nature of epigenetic modifications provides a unique opportunity to alter treatment paradigms and provide new therapeutic options for patients whose malignancies possess these aberrant epigenetic modifications, paving the way for new and personalized medicine. With the development of epigenetic mechanism-based drugs, we evaluate appropriate and effective approaches for clinical applications to treat various diseases.

Visikol specializes in the analysis of the mechanism of action (MOA) for the screening of epigenetic drugs. With a wide range of flexibility, we offer numerous customized assays to clients for evaluating the efficacy and potential toxicity of epigenetic drugs. Utilizing High Content Screening, our assay formats provide the ability to simultaneously measure multiple endpoints. We offer assay formats using traditional monolayer models, 3D cell culture models, which better recapitulate the microenvironment in vivo,  3D tissue models (ex vivo), and pharmacokinetic endpoints. Using digital high throughput imaging and advanced image analysis, a large number of valuable endpoints can be captured after immuno-histology. 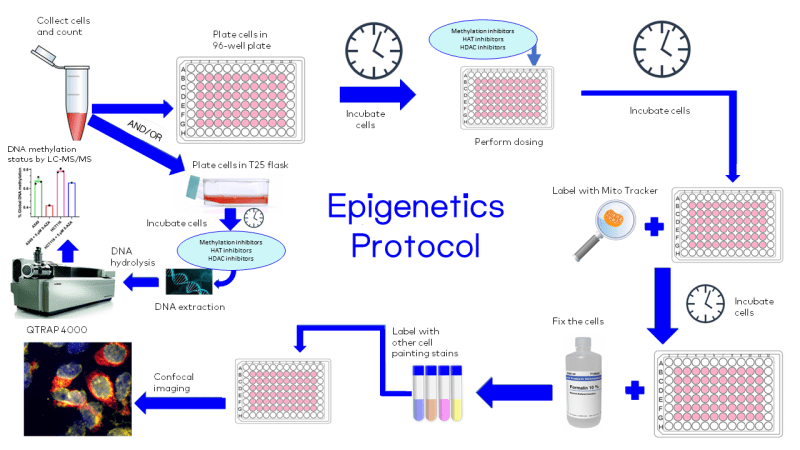 Epigenetics refers to stable chemical modifications to the structure of DNA and its packaging proteins, histones, and regulatory RNAs, such as microRNAs, and is subject to regulation by environmental and pathological factors. Epigenetic mechanisms are also essential for tissue-specific gene expression patterns in mammals. Global changes in the epigenetic landscape are a hallmark of various chronic conditions such as epilepsy, Alzheimer’s disease, and cancer. DNA methylation and two histone post-translational modifications, methylation, and acetylation are perhaps the most extensively studied epigenetic modifications, both in normal conditions and in a wide variety of pathologies.

DNA methylation in mammals occurs at the 5-position of the nitrogen base, cytosine, typically at CpG dinucleotide islands, to produce 5-methylcytosine. DNA methylation is a stable epigenetic mark that has an important role in mammalian development, differentiation, and maintenance of cellular identity through the control of gene expression. When occurring in promoter regions, this modification provides stable gene silencing and reduces gene expression and transcription. DNA methylation is enzymatically catalyzed by a class of enzymes called DNA methyltransferases (DNMTs) utilizing S-adenosylmethionine (SAM) as the methyl group donor. SAM is then converted to S-adenosylhomocysteine (SAH) (Figure 1A). Changes in DNA methylation patterns are associated with some pathological conditions such as cancer, of which many forms are characterized by genome-wide hypomethylation and site-specific promoter hypermethylation.

At Visikol, we developed a robust bioanalytical methodology based on LC-MS/MS for the rapid and accurate quantification of global DNA methylation in each sample. In brief, DNA is extracted from cancer cell lines or tissues and enzymatically hydrolyzed into its corresponding nucleosides by DNA Degradase Plus (Zymo Research, E2021). Nucleosides of interest, namely 2’-deoxycytidine (2’-dC), 5-methyl-2’-deoxycytidine (5mdC), and 2’-deoxyguanosine (2’-dG) are separated on an Agilent PoroShell 120 EC-C18 and quantified by a SCIEX QTRAP 4000 mass spectrometer in the multiple reaction monitoring (MRM) mode (Figure 1B). Linear dsDNA standards at a length of 897 bp (Zymo Research, D5405) were used to construct a calibration curve for global DNA methylation quantification. All DNA standards have the same sequence with either 100% dC, 100% 5mdC, or 100% 5hmdC. The calibration curve was constructed by mixing an increasing amount of hydrolyzed 5mdC in the presence of the same amount of hydrolyzed 2’-dC. To show the applicability of our methodology, two cancer cell lines, A549 (human lung carcinoma) and HCT116 (human colorectal carcinoma), were treated with 5 µM of the DNA methyltransferase inhibitor, 5-azacytidine (5-AZA), for 72 hours, and their global DNA methylation status was assessed by our method. As expected, 5-AZA treatment showed a 40% and 19% reduction in global DNA methylation status of A549 and HCT116, respectively, compared to their baseline methylation levels (Figure 1C). 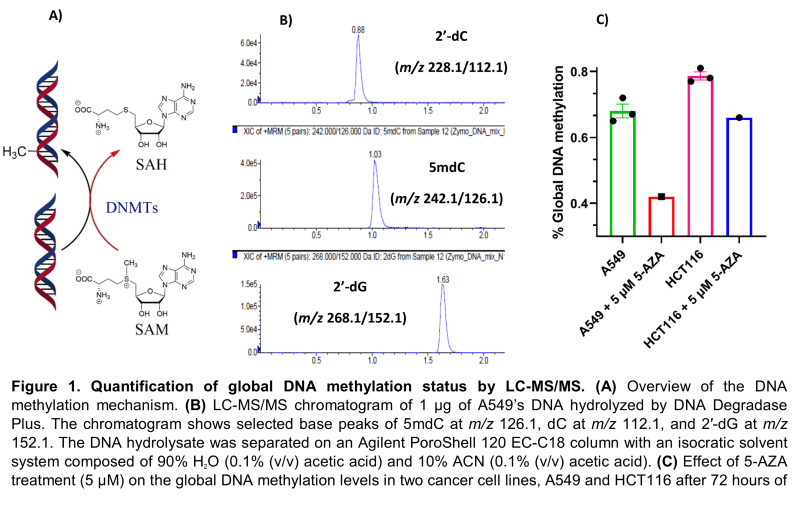 At Visikol, we are developing methods to visualize epigenetic changes at the cellular level, after the drug treatment. Cells treated with different epigenetic drugs are stained with different fluorescent dyes (e.g., stains for the plasma membrane, mitochondria, cytoskeleton, Golgi apparatus, lysosomes, nucleus, etc.) in live or fixed cells. After labeling different cellular compartments,  the cells are imaged on Molecular Devices ImageXpress high content confocal imager (Fig. 2). Based on the image analysis, we can quantitively profile multiple phenotypic parameters to better understand the effect of different epigenetic drugs and elucidate their mechanism of action. 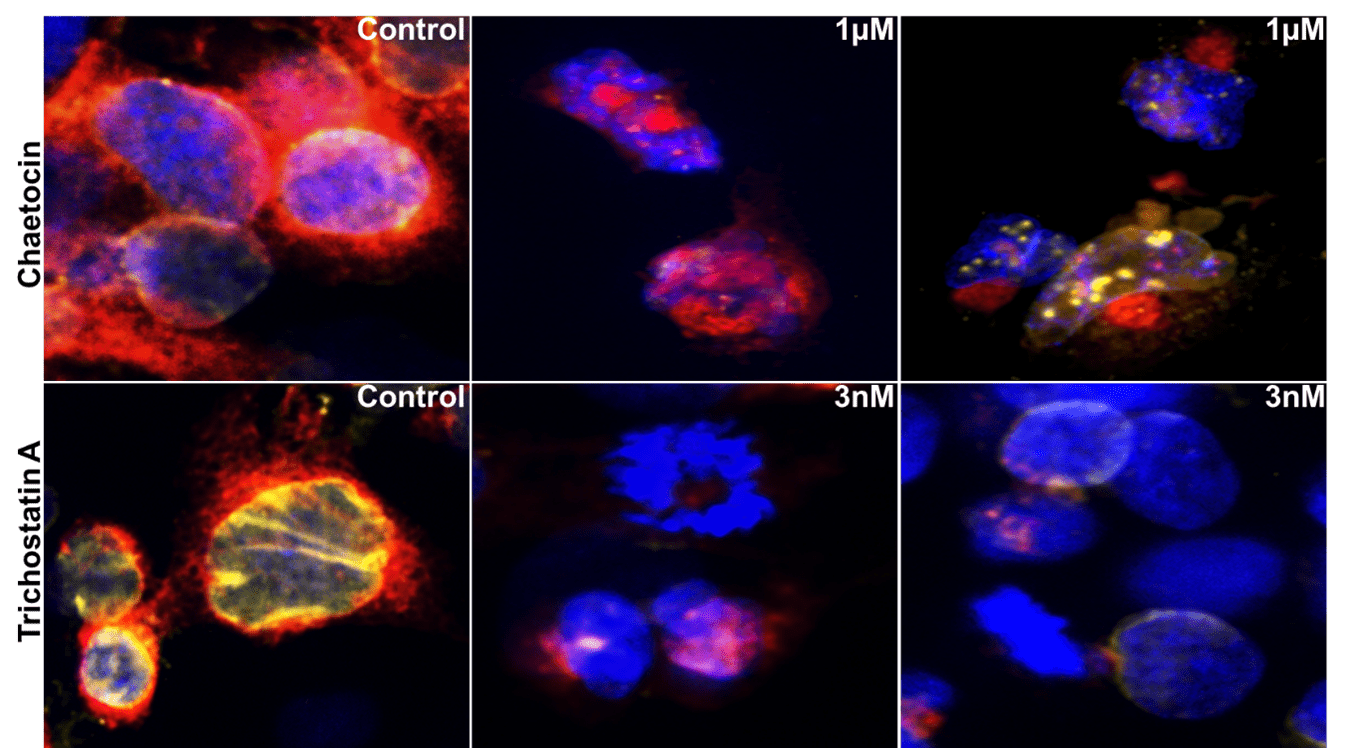 If you are working on an epigenetic drug discovery project and need help quantifying your global DNA methylation or high throughput imaging, please reach out to our team to explore your epigenetic needs.