Visikol scientists and technicians work daily against the persistent enemy of quality fluorescent microscopy:  autofluorescence.  A recent post gave some background and a few methods for dealing with common autofluorescence pitfalls, including issues caused by endogenous elastin and lipofuscins, as well as aldehydes formed by fixation.  Here are a few more options that can make the fight against autofluorescence go a little more smoothly. 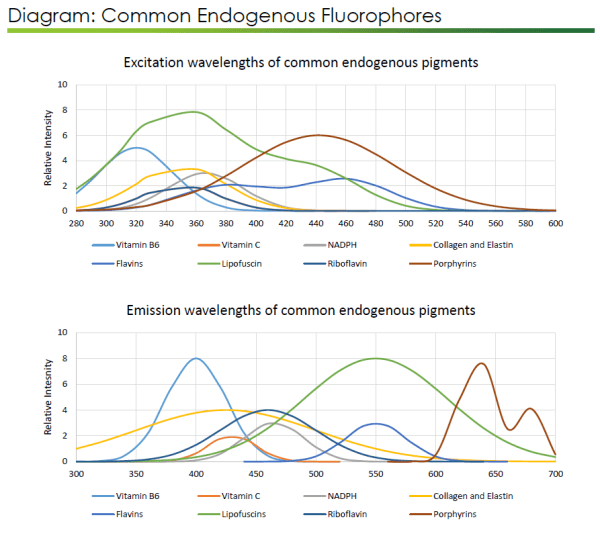 Fixation-induced fluorescence is often a result of the cross-linking caused by many common fixative agents.  As noted previously, some ways to prevent this include aldehyde blocking and pre-bleach treatment using a lightbox.  Of course, it’s also possible to reduce this by simply using a non-crosslinking fixative that does not contain an aldehyde.  However, this can cause other problems with image quality, as proteins that aren’t bound to the structure of sample tissues may have “lost” epitopes.

One simple guideline to always keep in mind is to be sure that fixation occurs for the minimum amount of time required.  This will vary according to sample size and the type of tissue, so some experimentation may be required in order to determine the optimal timing.  Remember, also, that immersion fixed tissues should generally be less than 6 mm thick.  This will prevent the need for over fixation in most cases.

It is also possible to induce autofluorescence by incubating tissues at elevated temperatures.  Carrying out each step before imaging (antigen retrieval, labeling, dehydration, and clearing) at room temperature or below can help to prevent this.  When performing these steps at 4°C, remember that slower diffusion times may require you to increase incubation times by 1.5-2x.  You may also find that alcohol dehydration leads to increased intensity of autofluorescence in the red range (530-600 nm).  This effect can be more difficult to prevent, as many clearing agents require dehydration for optimal use.  However, it should be kept in mind while analyzing images.

Finally, there is always the possibility that a researcher will encounter natural – or endogenous – autofluorescence due to substances found in the tissue of interest.  Heme is a common offender here; its porphyrin ring structure has complicated many image analyses due to its broad autofluorescence.  There is a simple way to prevent this:  Perfusing tissues with PBS at the time of sacrifice (prior to fixation) will remove blood cells and their associated heme from tissues.  In some cases, such as with archived specimens, it may not be possible to travel back in time before fixation to perfuse the tissue.  In these cases, there is a helpful procedure involving the incubation of tissues, before staining and clearing, in 5% H2O2 in methanol/DMSO (1 part 30% H2O2, 4 parts methanol, 1 part 100% DMSO) at 4°C overnight.

Visikol’s experienced team is ready to help you with the challenges of autofluorescence.  Simply reach out to speak to one of our scientists about your imaging needs.