Epigenetics is the study of heritable changes in gene expression without any alternation in the DNA sequence. The main contents of epigenetics include DNA methylation, histone modification, and non-coding RNAs. Methylation is the most common posttranscriptional modification in cellular RNAs, which has been reported to modulate the alteration of RNA structure for initiating relevant functions such as nuclear translocation and RNA degradation. RNA methylation is a post-transcriptional level of regulation. In recent years, with the discovery of RNA methylation-related proteins and the development of high-throughput sequencing technology, the mystery of RNA methylation has been gradually revealed, and its biological function and application value have gradually emerged.[i] N6-methyladenosine (m6A) is the most abundant form of mRNA modification in eukaryotes. It affects various aspects of RNA metabolism, including nuclear export, translation, decay, and alternative splicing. In addition, m6A also participates in a great number of human physiological processes, ranging from spermatogenesis modulation, response to heat shock and the control of T cell homeostasis to stem cell proliferation and differentiation.[ii]

Visikol optimized and developed a robust bioanalytical method for the quantification of global DNA methylation percentage and extended the application of this method to monitor the methylation status of any gene of interest.  Recently, Visikol studied m6A methylation of RNA in cancer cell lines following treatment with some epigenetic drugs. In brief, three cancer cell lines: A549 (human lung carcinoma), HTC116 (human colorectal carcinoma), and U2OS (human osteosarcoma) were treated with two concentrations (1 µM and 5 µM) of the DNA methyltransferase inhibitor, 5-AZA, and their total RNA was extracted 72 hours later using the Qiagen kit (#74104).

Enzymatic hydrolysis of the extracted RNA samples was completed using the published protocol by Crain[iii] with some modifications. Briefly, 10 µL of 0.1 M ammonium acetate (pH 5.3) and 2 U of nuclease P1 (1µL) (Sigma-Aldrich, N8630) were added to 1 µg of RNA solubilized in 100 µL of the elution buffer, and then tubes were incubated at 45 oC for 2 hours. Subsequently, 11 µL of 1M sodium bicarbonate (freshly prepared, pH ~7.8–8.0) and 0.002 U of venom phosphodiesterase I (Sigma-Aldrich, P3243) were added, and the tubes were incubated at 37 oC for two hours. The resulting nucleotide mixture was incubated with 0.5 U of alkaline bovine phosphatase (Sigma-Aldrich, P6774-2KU) at 37 oC for one hour to complete the hydrolysis of all phosphate groups and to produce nucleosides. Prior to injection into the LC-MS/MS, samples were de-proteinated and desalted using 3K Nanosep spinning columns (VWR, 29300-620). Samples were brought up to 200 µL with mQ H2O. 4 µL of 3N15-2′-deoxycytidine (3.8 mM) was added to all samples as an internal standard.

Separation of the nucleosides of interest, m6A, and adenosine (ADO) was completed on an Agilent PoroShell 120 EC-C18 and quantified with a SCIEX QTRAP 4000 mass spectrometer in the multiple reaction monitoring (MRM) mode (Figure 1A). The molar ratio of the m6A over ADO provides the quantitative measurement of the global m6A RNA methylation status of the corresponding sample. No significant change in the global m6A RNA methylation status was observed on all the three cancer cell lines following the treatment of the DNMT inhibitor, 5-AZA, at the tested concentrations (Figure 1B). 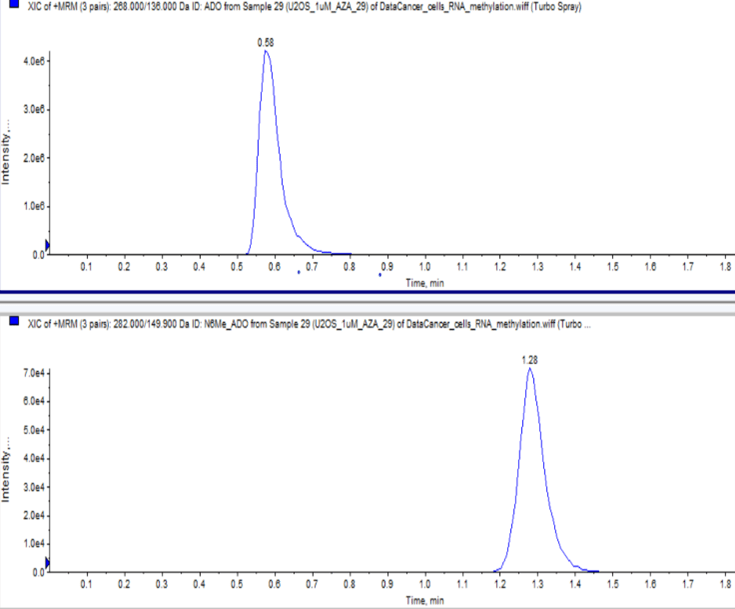 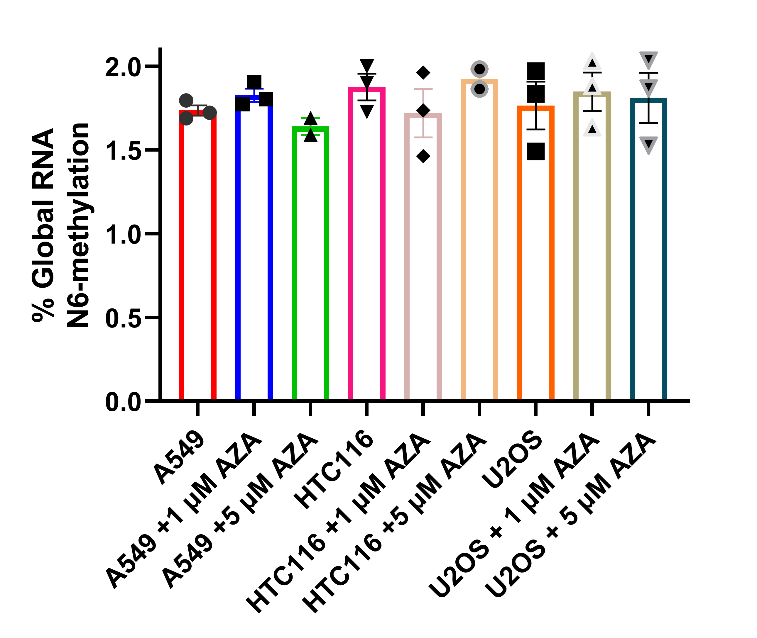 [ii] Zhou Y et a., Principles of RNA methylation and their implications for biology and medicine. Review. Biomed Pharmacother. 2020, 131:110731.