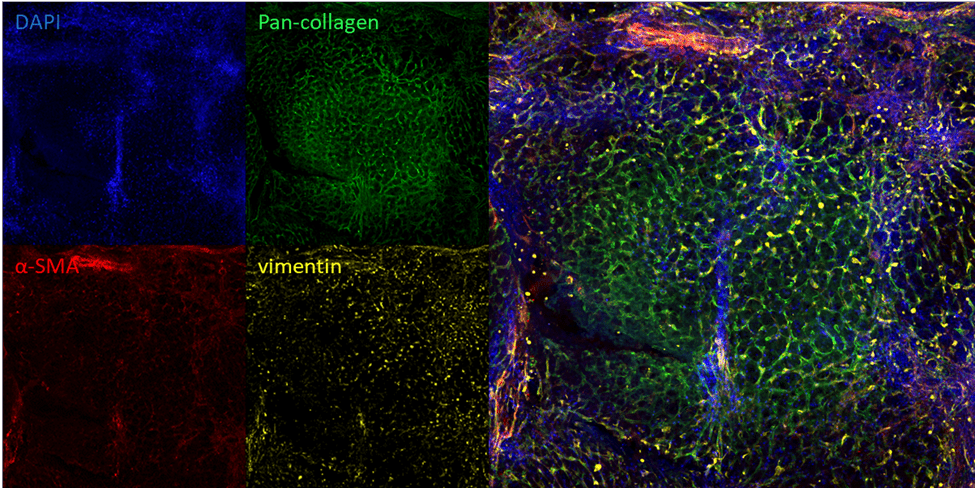 The goal of fixation is to preserve the structure of cells or tissues so that they can be labeled and visualized post-experiment. There are two main factors that play into fixation, the type of fixative and the timing of fixation. Common fixatives are formaldehyde (4% paraformaldehyde or 10% formalin), methanol and acetone, with formaldehyde fixatives being the most common. Formaldehyde fixatives are typically a safe choice, but care should be taken when evaluating antibodies for targets of interest to make sure they are compatible with the chosen fixative. Both under-fixing (not allowing enough time in the fixative) and over-fixing (too much time in the fixative) can cause issues with downstream labeling. Under-fixing is more of an issue in 3D in vitro models (such as organoids) and in tissues where not enough time is allowed for the fixative to diffuse through the entire sample, leaving a center section unfixed which results in cell decay in that area. Over-fixation can occur with any sample and typically results in the masking of antibody epitopes and thus poor labeling.

Most primary antibodies used for immunofluorescent labeling are created using a mouse or rabbit as the host species. Host species is particularly important when creating panels with multiple antibodies as the use of the same host species can result in dual labeling of both antibodies with the same fluorophores (see 6 and 7 for exceptions) and thus differentiation between the labeling of the two antibodies would be difficult to impossible. Other host species are available for some antibodies, including but not limited to chicken, goat, guinea pig, hamster etc., which can make panel design easier. It is also equally important that the chosen antibody has been shown to be reactive with the species type of the sample, this information can typically be found on the manufacturer’s website for the antibody.

The choice in fluorophore can be just as important as choosing the right antibody. The decision around what fluorophore(s) to use are based on two primary considerations- the first being the limitations of the microscope being used for imaging and the second being overlap of the fluorescent spectra. A third, lesser consideration is tissue Autofluorescence, wherein a tissue may have high background fluorescence at a certain wavelength and thus use of a fluorophore at that wavelength may want to be avoided, if possible. Fluorescent microscopes come with sets of filters that allow for excitation of fluorophores at certain wavelengths of light and separation of the excitation light from the light emitted from the sample. Care should be taken to make sure that a chosen fluorophore is compatible with the available microscope. The key regarding florescent spectra is to minimize overlap between the fluorophores, as strong signal from one fluorophore may bleed through into another wavelength giving a false signal if there is substantial overlap in the sprectra. Secondary antibody manufacturers typically have a webpage allowing for evaluation of fluorescent spectra overlap.

Another way to get around the problem of primary or secondary antibody host species is to use antibodies that have already been conjugated to fluorophores. This allows for the pairing of primary antibodies that would be impossible otherwise. The downsides to conjugated primary antibodies are that the signal is weaker because there is only one fluorophore bound to each primary (whereas in secondary labeling many secondary antibodies can bind to one primary), they limit flexibility in fluorophore choice, and they are less readily available commercially and require a large amount of antibody to do the conjugation in-house, which can be cost prohibitive.

In ‘primary antibody selection’ we discussed how when building a panel, it is best to use antibodies that come from different host species, however this isn’t always possible as mouse or rabbit may be the only option available. Conveniently, many mouse antibodies can be paired together, as long as they have different isotypes (i.e., IgG, IgG1, IgG2a etc.) and care is taken when choosing secondary antibodies and when to apply them. For instance, mouse IgG and IgG1 antibodies can be used together, but they wouldn’t be able to be labeled in parallel as an anti-mouse IgG secondary antibody would bind to both the IgG and IgG1 primaries, but mouse IgG1 and IgG2a antibodies would be able to be labeled in parallel since the secondaries are more specific.

Most antibody manufactures do not do extensive antibody validation, and so it falls on the end user to make sure that the chosen antibody works for their application. Ideally, whenever planning to use a new antibody, that antibody would be tested against tissues or cells that are known to express (positive control) or no expression (negative control) for that marker of interest. Following through with this process allows for the end user to have confidence that their chosen antibody is labeling for their target of interest, and not just binding non-specifically to the tissue. However, doing extensive validation internally is not always a viable option and so a researcher can turn to literature. The manufacturer’s website for a primary antibody is key to learning more about how that antibody has been used previously and for what applications. Looking through representative images in the literature for the target of interest, performing a titration of the antibody in the sample cell type/tissue and including a secondary antibody only control and possibly an isotype control can be an alternative to traditional validation.

Blocking does just as its name suggests, it blocks non-specific binding of the primary and secondary antibodies within a sample. Animal serums such as fetal bovine serum (FBS) and bovine serum albumin (BSA) are common agents that can make up a blocking solution. However, it is best practice to use a serum specific to the host species of the secondary antibody, for example using goat serum for a goat anti-rabbit secondary antibody, as an antibody raised in goat is less likely to non-specifically bind to goat proteins. For most tissues/cells using a primary antibody that is the same species as the tissue/cells being labeled is a non-starter, however due to the prevalence of mouse antibodies, mouse-on-mouse blocking has been developed to decrease non-specific background signal is this sample type. Several manufacturer’s offer mouse-on-mouse blocking kits and protocols, which essentially incorporates another blocking step specifically to suppress endogenous immunoglobulins in the mouse tissue, resulting in less non-specific binding of the anti-mouse secondary antibodies.

Reach out today find out how Visikol can help advance your own research!